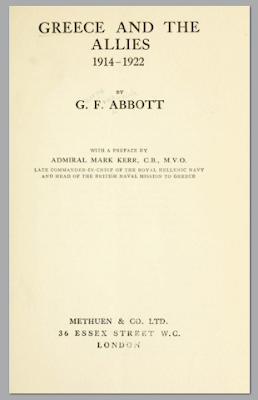 Note:  This book does not have a Table of Contents.  I have transcribed  below the 27 Names mentioned in the book along with the Prefaces written by:

The late convulsions in Greece and Turkey, and the consequent revival
of all the mis-statements which, during the War, flowed from ignorance
or malice, render the publication of this book particularly opportune.

Mr. Abbott deals with his subject in all its aspects, and presents for
the first time to the British public a complete and coherent view of
the complicated circumstances that made Greece, during the War, the
battle-ground of rival interests and intrigues, from which have grown
the present troubles.

In this book we get a clear account of the little-understood relations
between the Greek and the Serb; of the attitude of Greece towards the
Central Powers and the Entente; of the dealings between Greece and the
Entente and the complications that ensued therefrom.  Mr. Abbott traces
the evil to its source--the hidden pull of British versus French
interests in the Eastern Mediterranean, and the open antagonism between
M. Venizelos and King Constantine.

All these subjects are of acute interest, and not the least interesting
is the last.

The persecution of King Constantine by the Press of the Allied
countries, with some few good exceptions, has been one of the most
tragic affairs since the Dreyfus case.  Its effect on the state of
Europe during and since the War is remarkable.  If King Constantine's
advice had been followed, and the Greek plan for the taking of the
Dardanelles had been carried out, the war would probably have been
shortened by a very considerable period, Bulgaria and Rumania could
have been kept out of the War, and probably the Russian Revolution and
collapse would not have taken place; for, instead of having Turkey to
assist Bulgaria, the Allied forces would have been between and
separating these two countries.

In this case King Constantine would not have been exiled from his
country, and consequently he would not have permitted the Greek Army to
be sent to Asia Minor, which he always stated would ruin Greece, as the
country was not rich enough or strong enough to maintain an overseas
colony next to an hereditary enemy like the Turk.

It is illuminating to remember that the Greek King's policy was fully
endorsed by the only competent authorities who had a full knowledge of
the subject, which was a purely military one.  These were the late
Field-Marshal Lord Kitchener of Khartoum, the British Admiral at the
head of the Naval Mission in Greece, and Colonel Sir Thomas Cuninghame,
British Military Attaché in Athens; but the advice tendered by these
three officers was disregarded in favour of that given by the
civilians, M. Venizelos and the Allied Ministers.

Mr. Abbott's book will do much to enlighten a misled public as to the
history of Greece during the last nine years, and many documents which
have not hitherto been before the public are quoted by him from the
official originals, to prove the case.

For the sake of truth and justice, which used to flourish in Great
Britain, I hope that this book will be read by everyone who has the
welfare of the British Empire at heart.

As this work goes to press, the British Empire finds itself forced to
vindicate its position in the East: a position purchased at the cost of
much blood and treasure during the war, to be jeopardized after the
conclusion of peace by the defeat of Greece and the defection of France.

In the following pages the reader will find the sequence of events
which have inevitably led up to this crisis: an account of transactions
hitherto obscured and distorted by every species of misrepresentation
and every known artifice for manipulating public opinion.

The volume is not a hasty essay produced to exploit an ephemeral
situation.  It embodies the fruit of investigations laboriously carried
on through six years.  A slight account of the earlier events appeared
as far back as the winter of 1916 in a book entitled, _Turkey, Greece,
and the Great Powers_: that was my first effort to place the subject in
its true perspective.  The results were interesting.  I was honoured by
the reproaches of several private and by the reprobation of several
public critics; some correspondents favoured me with their anonymous
scurrility, and some bigots relieved me of their acquaintance.  On the
other hand, there were people who, in the midst of a maelstrom of
passion, retained their respect for facts.

I pursued the subject further in a weekly journal.  Two of my
contributions saw the light; the third was suppressed by the
Authorities.  Its suppression furnished material for a debate in
Parliament: "This is a cleverly written article," said Mr. John Dillon,
"and I cannot find in it a single word which justifies suppression.
All that one can find in it is that it states certain facts which the
Government do not like to be known, not that they injure the military
situation in the least, but that they show that the Government, in the
opinion of the writer, made certain very bad blunders."  The Home
Secretary's answer was {viii} typical of departmental dialectics: "It
is inconceivable to me," he declared, "that the Government would
venture to say to the Press, or indicate to it in any way, 'This is our
view.  Publish it.  If you do not, you will suffer.'"  What the
Government did, in effect, say to the Editor of the _National Weekly_
was: "This is not our view.  Publish it not.  If you do, you will
suffer."

With an innocence perhaps pardonable in one who was too intent on the
evolution of the world drama to follow the daily development of
war-time prohibitions, I next essayed to present to the public through
the medium of a book the truth which had been banned from the columns
of a magazine.  The manuscript of that work, much fingered by the
printer, now lies before me, and together with it a letter from the
publisher stating that the Authorities had forbidden its publication on
pain of proceedings "under 27 (b) of the Defence of the Realm
Regulations."

And so it came about that not until now has it been possible for the
voice of facts to refute the fables dictated by interest and accepted
by credulity.  The delay had its advantages: it gave the story, through
the natural progress of events, a completeness which otherwise it would
have lacked, and enabled me to test its accuracy on every point by a
fresh visit to Greece and by reference to sources previously
inaccessible, such as the Greek State Papers and the self-revealing
publications of persons directly concerned in the transactions here
related.

I venture to hope that so thorough an inquiry will convey some new
information respecting these transactions even to those who are best
acquainted with their general course.  If they find nothing attractive
in the style of the book, they may find perhaps something useful,
something that will deserve their serious reflection, in the matter of
it.  For let it not be said that a story starting in 1914 is ancient
history.  Unless one studies the record of Allied action in Greece from
the very beginning, he cannot approach with any clear understanding the
present crisis--a struggle between Greeks and Turks on the surface, but
at bottom a conflict between French and British policies affecting the
vital interests of the British Empire.