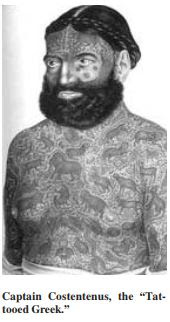 By Steve Frangos
Special to The National Herald

Among the Greeks of Old New York, none were more remarkable than, or had such a unique influence on American politics as, George Constantine Alexandrinos.

Between roughly 1850 and 1880, we can easily document the presence of a small but notable colony of Greeks living and working in New York City. While the Greek merchant class has occupied the attention of most writers, there were certainly other Greeks who definitely caught the attention of the wider American public. In this regard, there is no question that the man generally known as “Captain Costentenus” was then among the most recognized Greeks, not simply in New York City, but throughout the United States.

Captain Costentenus, a self-identified Greek Albanian, was the first fully tattooed man to become a national celebrity. We must quickly stress that this Greek performer was not the first tattooed individual to tour the country. Tattooed individuals such as Cabri, Rutherford and O'Connell unquestionably preceded him. But Captain Costentenus had two things these other persons did not:

First, his traditional Burmesestyle tattoos were more elaborate than any seen before in public; second, P.T. Barnum.

In a striking combination of blue and red, the Greek's tattoos “consisted of 388 symmetrically arranged and closely interwoven images which covered his entire body, including his face, eyelids, ears and (genitals). The designs, according to his publicity, consisted of crowned sphinxes, dragons, serpents, monkeys, elephants, leopards, tigers, lions, panthers, gazelles, cats, crocodiles, lizards, eagles, storks, swans, peacocks, owls, fishes, salamanders, men, women, fruit, leaves and flowers. Most of them were quite small but exceptionally exact in their detail (wikibmezine.com).”

According to Alexandrinos, he received his tattoos in Chinese Tartary (the general location of present day Burma) as punishment for his part in “unspeakable crimes” during a rebellion against the king. It seems that Burmese lettering also constituted his tattooing in the interstices between his fingers. When asked what the writing said, his stock answer was that it branded him “the greatest rascal and thief in the world.”

Phineas Taylor Barnum (1810- 91), “the Shakespeare of Advertising,” as he was called during his lifetime, 'discovered' the Greek in the early 1870's, and thereafter prominently showcased him in his Hippodrome Museum. Such was Captain Costentenus' status that Barnum paid him a reported $1,000 a week which, in the 1870-80's era, was a staggering amount of money. It was Barnum who dubbed him both “Captain Costentenus” and “The Living Canvas Back.”

As a teenager, long before I learned Costentenus' name, let alone his ethnicity, I once saw a full color 4x6 square-foot original poster of this man in an exhibit. It was stunning. All one saw was Costentenus' back, with his arms on his hips and his face in profile. With the proud words “Greatest Show on Earth” as a banner, Barnum's name and all the rest, this poster was valued at more than $250,000 - at that time.

While many legends and P.T. Barnum publicity “hokum” still surround Captain Costentenus' career, it is generally accepted that this Greek was the first person to consciously decide to get his entire body completely tattooed for the sole purpose of being an attraction. This decision, once he was in Barnum's hands, made him world-famous.

Emblematic of the Greek's standing in Barnum's productions, we need only note what took place on December 9, 1876 during the last performance of the season for the Greatest Show on Earth: “During the performance, Mr. P.T. Barnum presented a gold metal to the tattooed Greek, Captain Georges Costentenus, prefacing the presentation with a brief address, complimentary to the man, and describing the painful manner in which he became tattooed… The medal is two inches in diameter, and is valued at $200. It was manufactured by Tiffany & Company. On one side is engraved a portrait of the tattooed man, showing the animals (etc.) on his body, and on the other side is the following inscription: 'Presented by P. T. Barnum to Capt. Georges Costentenus, in recognition of his honorable conduct and gentlemanly deportment during a two years' successful engagement. New York, 1877.' ”

To place this event within its wider historical context, 1876 was the country's centennial and a year of elaborate public celebrations. 1876 was also the year of the battle of Little Big Horn, which had occurred on June 25. News of the massacre was not released to the general public until after July 4 so as not to spoil the Centennial observance.

Still, exactly how prominent was Captain Costentenus? By October 23, 1881 no less a source than the New York Times opines that concerning “Captain Costentenus, the tattooed man… anybody in the country who has not seen him must live far in the backwoods.”

Contributing to the Greek's notoriety were the various editions of his booklet, “The True Life and Adventures of Captain Costentenus, the Tattooed Greek Prince (Popular Pub Co., New York: 1881).” Undoubtedly a total fabrication, copies of this booklet are still to be found at the Princeton, Harvard and British Museum Libraries. The contemporary availability of this booklet is due to the fact that, during the Greek's career, the volume always experienced “good sales (www.bmezine.com).”

Not every New Yorker seems to have appreciated Captain Costentenus. On March 31, 1878 the New York Times reported the following incident: “Captain Costentenus, the tattooed Albanian Greek whom P.T. Barnum introduced a few years ago to the wondering visitors at the Hippodrome, walked up Broadway on Friday evening at 6 o'clock, and reaching Gallagher's saloon in the Albemarle Hotel Building, he turned aside to enter. As he pushed open the swinging door, two men stood in the passage, and in his effort to get in, the Greek jostled against one of them. The two men were Cathcart, a well-known sporting character, and a man known as 'The Doctor.' Costentenus, who is a very polite man, speaks poor English, but he said, 'Excuse me. I go inside,' as he pushed between the two men. One of them laughed at him, and the other punched him in the side with his elbow. This enraged the Captain, and he made an impatient remark. Without further parley, one of the rude men who barred the doorway struck him a powerful blow with his fist, hitting him in the temple. He fell to the floor, where he remained in a dazed condition for about a quarter of an hour. The outer doors were closed to keep out the crowd, and when the injured man revived he was permitted to go away, his assailants having disappeared. Yesterday, the Captain had his head bandaged, and showed a large swelling on his head as a result of the encounter. He said he had never before seen the men who attacked him, and he would not know them if he should meet them. He wears very handsome diamond rings and other jewelry, valued altogether at about $3,000, and usually goes armed to protect himself from persons who might attempt to rob him. He says he was so unexpectedly assaulted that he had no time to offer resistance.”

This incident did not deter the good Captain from continuing his career and life without a backward glance. In fact, we should note that on December 22, 1883 Captain Costentenus “took out naturalization papers in the Superior Court.”

A fascinating moment in American and Greek American history involves a political cartoon referring directly to Captain Costentenus. James Gillespie Blaine (1830-93), a U.S. Congressman, was running against Grover Cleveland (1837- 1908) in the November 1884 Presidential election. “Cleveland had dallied with a widow and refused to marry her when she became the mother of his child, and Blaine had taken gifts from businesses and lied about them. The choice, as a local paper put it, was between a private immoralist and a public immoralist (www.tattooarchive.com).”

At this juncture, Bernard Gillam, a political cartoonist, working for Puck's, an independent weekly, began a series of political cartoons commenting upon Blaine's political indiscretions. In Puck's April 16, 1884 issue, Gillam's anti-Blaine cartoon appeared with the caption, “Narcissus: Or The Man Who Was Mashed on Himself.” Blaine is shown gazing fondly at his own reflection in a pool of water. Aside from the Classical Greek reference, Blaine is made to resemble Captain Costentenus by showing him covered in tattoos. The tattoos were not animals, plants or other decorations, however, but the names of the trusts and special interests which had purchased Blaine's support during his years in Washington.

The tattooed images caught the popular imagination, and wherever Blaine traveled thereafter, he was met with shouts of “Tattooed Jim.” Many historians contend that these cartoons determined the final outcome of the 1884 presidential campaign.

We can not now say how the wider Greek colony of Old New York responded to the presence of George Constantine Alexandrinos, but we do know he left a visual impression which still resonates within popular American culture to this very day.