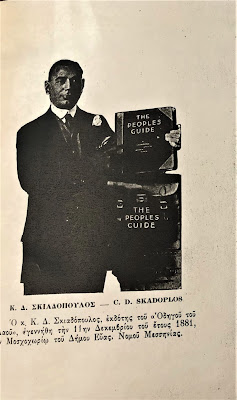 I have digitized the rare book “The People’s Guide” by C. D. Skadoplos, published in the U.S. in 1920. The book includes 2 parts:  Part One:  Of the Proper Rearing, Education, Culture and Refinement Part Two:  A Biographical List of Greek Businessmen in the United States 1919-1920.  (Note - includes the following states:  Missouri, Illinois, Iowa, Indiana, Kansas, Minnesota, Nebraska, North Carolina, New York, South Dakota & Wisconsin, but clearly doesn’t include all Greek businessmen in those states.) This book is unusual because Part Two of the book not only includes the names of Greek businessmen, but each person mentioned has a “biographical sketch” published about them, many including information such as birth year and the village of origin.        The book was published in Greek, but I have indexed the 804 names in ENGLISH, which are listed below.  There are also 215 photographs associated with these names.  Unfortunately, the only book available through interlibrary l
Post a Comment
Read more
More posts