Showing posts from May, 2019
Show all

1,160 Names in Book - The Greek Community in Mozambique 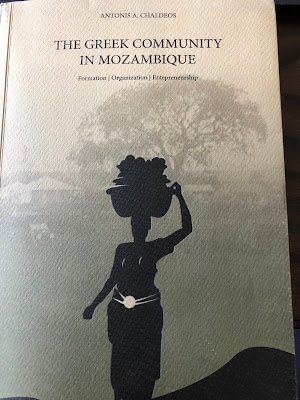 Book – THE GREEK COMMUNITY IN MOZAMBIQUE by Antonis A. Chaldeos published 2015, Athens This book includes references to 1,160 Greeks in Mozambique.   For your reference I have indexed the names below and provided the Table of Contents. I purchased the book directly from the author Antonis A. Chaldeos who is on Facebook and is a member of our Hellenic Genealogy Geek Facebook group.   The book also lists his email as anchald1997@hotmail.com TABLE OF CONTENTS PART A – THE GREEK COMMUNITY IN MOZAMBIQUE Chapter 1 – MOZAMBIQUE:  THE COUNTRY AND ITS HISTORY Geography History of Mozambique Early installations The slave trade in East Africa The Portuguese conquest Mozambique, a field of conflict of the European imperialism Towards the independence Post-independence period Multiracial Mozambique The role of the Portuguese The Indian community The Chinese community Chapter 2 – THE FORMATION OF THE GREEK COMMUNITY Chapter 3 – ANTHROPOGEOGRAPHY OF THE GRE
Post a Comment
Read more

This is the village of my Cretan ancestors, the FOUSKETAKIS family. ----- This page is the link to the Facebook page for the "Folklore Museum of Agia Marina" https://www.facebook.com/pg/folkmuseumagiamarina/photos/?ref=page_internal Don't forget to check out the Gallery Tab which includes many wonderful photographs, and the video tab which will allow you to watch 3 videos pertaining to life in Crete. ----- This is the link to their website -  https://folk-museum-agiamarina.business.site/?fbclid=IwAR3TtgBAlbWiK9uRRgCjHYVHGK-ortEZt7qDMCBPapsyG5Sf0RK-VPLbM6Y
Post a Comment
Read more 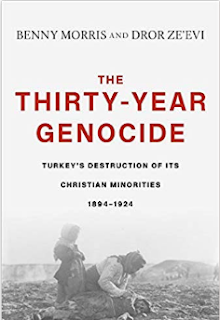 PROF. ZE'EVI TALKS TO TNH ABOUT THE 30-YEAR GENOCIDE Literary Review by Eleni Sakellis Published in The National Herald - May 11, 2019 (Note:  HGG has the permission of The National Herald to reprint articles that may be of interest to our group.) FYI - I have included TABLE OF CONTENTS at end of article ----- The Thirty-Year Genocide: Turkey’s Destruction of Its Christian Minorities, 1894-1924 by Benny Morris and Dror Ze’evi is a reappraisal of the giant massacres perpetrated by the Ottoman Empire, and then the Turkish Republic, against their Christian minorities. Previous books have examined the genocides against the Armenians, Assyrians, and Greeks separately or focused only on the period of 1913-1923, but The ThirtyYear Genocide is the first account to show that the three were actually one intentional effort to rid Anatolia of its Christian population. This well researched book by Morris, Professor Emeritus in the Department of Middle Eastern Studies
Post a Comment
Read more 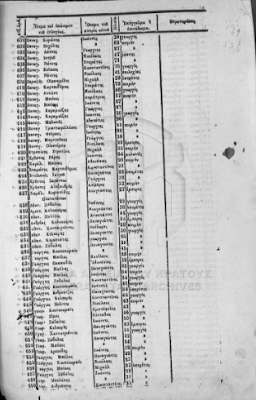 The digital collections of the Greek State Archives offer a wealth of information to those of us interested in Greek genealogy.  As part of their online collection is the "Election Material From the Collection of Vlachoyiannis" .  This includes "General Election Lists" for each Municipality; recorded by community (city, village, settlement, etc.). You can view a scanned copy of each list, printed in the Greek language.  This is a GREAT resource, but very difficult to navigate for those who do not read Greek.  Each row includes:  Line # -  Given Name, Surname - Father's Name -  Age - Occupation. I have translated these pages and made them available in both Greek and English, doing my best to transcribe the information accurately.  I would always recommend viewing the original scanned copies (link below). - To the best of my knowledge, these lists include all Males who were eligible to vote in the elections. - Names are in alphabetical order by Given name (Fi
Post a Comment
Read more
More posts