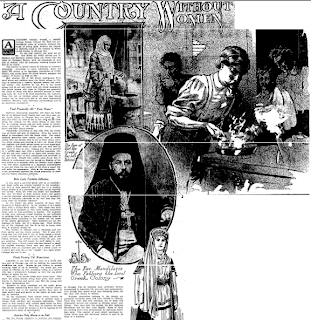 A COUNTRY WITHOUT WOMEN


To see that country you need not go far.  Any street car which carries you to Halsted and Harrison streets takes you there - into the heart of Chicago's Greece, with its thousands of men and no women, with its numerous rooming houses and few or no homes.


The number of Greek women in Chicago is variously estimated.  According to some estimates, there are about 250 women in an aggregate population of 18,000.  Others, and among them the Greek church, estimate the number of women as high as 600.


But whether 250 or 600 Greek immigrants have their wives, and children here, the Greek colony in Chicago is essentially a country without women and without homes.  The families do not live in the Greek colony and do not mix much with the Greek immigrants.  The Greek women who come to Chicago are generally the wives of those who have achieved success in business here, the well to do fruit merchants, for instance.  They live not on Halsted street nor on Blue Island avenue, but on boulevards and in the more fashionable residence districts, amid American surroundings and in an American atmosphere.

Food Practically All "From Home."

However interesting, beautiful, and ideal the home life of an isolated Greek family here and there may be, the Greek colony of Chicago does not know it.  The men live either in clubs of six or ten, with one of them doing the cooking for the entire group, or else they live in rooming houses and get their meals in restaurants, principally in the Greek cafes along Halsted street and Blue Island avenue.

Practically everything in this cafe, with the exception of bread and salt, is imported.  Even the bread is baked in accordance with the Greek taste.  The neighborhood groceries have nearly every food or staple article that the Greeks used to eat in their native country - from cheese and herring to olive oil, Greek wines and cognacs, and Greek spices which serve as appetizers.

Enter a Greek store or cafe and you will find no girl clerk to wait on you.  Instead you will be greeted by a middle aged man with a bristling mustache, who will fill out your orders in an exact and precise manner, but with none of that nimbleness and alertness of the girl clerk.  Should this middle aged Greek find it difficult to understand you - he having an English of his own which is in harmony with the Greek's vocal organs - he will shout something in a language unintelligible to you and from the rear part of the store a small boy will make his appearance.  This is the interpreter.  He is the go-between between the Greek proprietor or clerk and the chance American customer.

If you enter a crowded Greek cafe on an evening - and these cafes are always crowded in the evening - you will at once perceive that you are in a country where woman is at a premium.  The men are all swarthy and strong.  Some are what one might call handsome.  But they all show in their actions, dress, and speech a certain hugeness, uncouthness, and want of symmetry which is instantly traceable to the fact that they live away from all feminine influence.

In the winter the great majority of them wear sweaters or flannel shirts.  In the summer it is a black shirt with a turned down collar.  Only those who have worked up in business or who work among Americans dress more or less according to fashion.  The majority of this race, however - those working on the railroads or peddling fruit or doing any of the plodding labor in Chicago - dress according to the wishes and the stock of the nearby storekeeper.  Their fashions are not the fashions of today, but of a decade ago.  Their clothes are of the cheapest and the fit is not in every case what it properly should be.

The Greeks in Chicago own a thousand and one fruit stores and ice cream parlors.  But if you ever think that you will find in any of these places a Greek youth treating his Greek girl to ice cream, just as the Polish, German, or Jewish youth treats his girl, you are mistaken.  You will search for such sights in vain.  Here and there a Greek youth who has learned to speak the English language fairly well may carry on mild flirtation with an American girl, but a Greek youth or a Greek girl with his or her "steady" is a sight which Chicago has yet to see.

Likewise if you look for the type of a Greek factory girl in Chicago you will be looking for something that does not exist.  Greeks do not believe in women working, least of all in factories.  The Greek girl who comes to Chicago on rare occasions comes to a brother who has a prospective husband in view for his sister before he sends for her.

Answers to these questions are not easily given.  The Greeks themselves don't know the reasons clearly.  It is partly due to the exalted opinion they have of their native land and partly to the object of their coming to America.

To the emigrants from almost every country in Europe America has at one time or another been a refuge from political and economic oppression.  They come to this country with exalted ideas about its freedom and opportunities.  They thought America the best country in the world for people to live in because of its representative form of government.

America Only Means to an End.

But the Greeks emigrate to America not because they think the United States an ideal country in which to live or a country which because of its climate and institutions is superior to Greece.  They come because they know that one can make money in America, and money is what they need in order to live comfortably in Greece.

"America is a beautiful country," said a leading Greek in the Chicago colony last week, "but it does not compare in climate with Greece.  The Pacific coast approaches my country in climatic conditions, but no other portion of the country beside it.  The Greek cannot forget the raisin and fig fields of his native land.  He comes to America because his own country is impoverished.  After he has saved some money here he goes back and lives there like a king.

"The Greek comes to America primarily to make money with which to pay off his debts in the old world.  This accounts for his not bringing his family here.  He considers himself a sort of soldier of fortune, a hunter or fisherman going out to ply his vocation.  Under such conditions he cannot have his wife with him.  She would be a burden to him.  She would hinder him in his pursuit of money.

"Go through the Greek colony and you will find many men who have been in this country six, eight, and ten years without having seen their wives and children.  They are here to make their fortune, little or big, and to rest in their old age in their peasant home in Greece.  Often when these people return to Greece their children and even their wives find it difficult to recognize them.  Then years of a man's life is not a trifle.  Life in America either in a camp on the railroad track or in a rooming house and restaurant in Chicago's west side ages one quickly."

However, this stern resolve of the Greek to return to his native country even if it were only to die there is gradually becoming more and more modified.  Willingly or unwillingly, the Greek must make a home in the new world.  Those working on the railroads and coming to Chicago only for a few months in the winter invariably return to their native country after they have saved some money.  The Greeks, however, who are in Chicago, who do business here, gradually become accustomed to American life and stay here permanently, even though they spend much time dreaming about the day they will return to Greece.

Without themselves noticing it,  the Greeks are gradually becoming more and more settled in Chicago.  Thus they have now two churches, one at State and Nineteenth streets and another at Johnson street, near Taylor.  They have here two priests, the Rev. Ambrose Mandilaris and the Rev. Lion Pigers.  Some of them are settling down here permanently by marrying American girls.  The number of such mixed marriages between Greek men and American women is said to be close to a hundred.

"The Greek colony in Chicago is still essentially a colony of men only," said the Rev. Ambrose Mandilaris, "but this is not so remarkable when one considers the fact that Greek immigration is still young.  The Greek people have not yet got the right notion about America.  They are just beginning to get it.  And when they will have got it they will bring their wives and children here or they will bring their sweethearts and marry here just as the immigrants of all other nationalities do.

"I myself came to America with the intention of staying here only a year or two.  Yet I have now been here five years and I have no thought of leaving the country.  This is characteristic of every Greek.  He goes to America with a preconceived idea that he is not going to stay here long.

"We are, however, beginning to notice how America is changing all the plans of the immigrant and hence we seek to point it out to him.  Both myself and Father Pigers constantly urge our countrymen to bring their families here as this will add to their prosperity and standing in the community.  I have traveled far and wide in this country and visited many Greek communities, and I have found that the Greeks who have their families here are always better off.  Many a Greek who was poor before his wife was here became prosperous when he brought his family.

"We point out these things to our countrymen on every suitable occasion.  That our words are not in vain is shown by the fact that from a totally womanless community a few years ago the Greek colony in Chicago now numbers close to 600 families.  During the year 1908 we had 120 births among Greeks, and during that same year we had about fifty weddings - an average of one wedding each week.  We expect to do better in the future."

To what extent this urging on the part of the Greek church that the Greeks make for themselves not only a shelter but homes in Chicago is being heeded here is shown by the fact that the Greek girl who has hitherto never made her appearance in America is now finding her way to Chicago.  Young women who have sisters in Greece send for them feeling certain there will be many young men asking for their hands when once they come here, and apparently they are right in their calculation.  A Greek girl coming to Chicago is generally married to some countryman of hers in two or three months after her arrival.