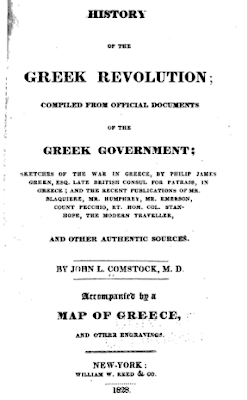 Available as a FREE Google ebook through the title link below

HISTORY OF THE GREEK REVOLUTION;

Compiled From Official Documents of the
GREEK GOVERNMENT;

Original copy was accompanied by a "Map of Greece, and other engravings".  These are not available with this ebook version.

I.  Geographical Situation and Population of Greece

IV.  From the foundation of the Turkish Empire to the death of Tamerlane

V.  From the Accession of Mahomet I. in 1416, to the taking of Constantinople by the Turks

VI.  From the Establishment of the Turkish power at Constantinople, to the death of Selim in 1520.

VIII.  Account of the War between Russia and Turkey, in which the Greeks join the former

XII.  From the beginning of the Revolution in Greece proper, to the reduction of the Lalliots

XIII.  From the time when Demetrius Ipsilanti assumes the Command in Greece, to his resignation in 1821

XIV.  Siege of Tripolizza, and the taking of the place by the Greeks

XV.  Continuation of the War from the taking of Tripolizza, to the sitting of the congress at Epidaurus

XVI.  Account of the Congress of Epidaurus, and the destruction of Scio

XVIII.  Continuation of the Campaign of 1822

XIX.  The Assembling of the Congress at Astros, and account of the Campaign of 1823

XXII.  Campaign of 1825 - Taking the Island of Sphacteria

XXV.  Campaign of 1826 - The taking of Missolonghi - Arrival of Lord Cockrane, and Gen. Church

XXVI.  Lord Cochrane takes command of the Hellas - Account of the campaign of 1827 - Batle of Navarino

XXVII.  Conduct of the European states in respect to Greece