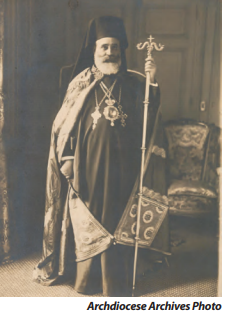 "August 2018 marks the centennial of a landmark event in the history of the Greek Orthodox Church in America. On Aug. 22, 1918, Archbishop Meletios Metaxakis, the metropolitan of Athens and president of the Holy Synod of the Church in Greece, arrived in New York City.

This was not the first visit by a hierarch of the Greek Orthodox Church to the Western Hemisphere. That distinction belongs to Dionysios Latas, Archbishop of Zante, who visited for six months in 1893, participating as the envoy of King George in the Parliament of the World’s Religions at the Columbian Exposition in Chicago.

Archbishop Meletios stayed only 81 days – from Aug. 22 to Nov. 10 – but his mission led to the establishment of a permanent hierarchical presence in America.

By 1918, our Church was well established in this country. There were about 140 parishes: at least one parish in 37 of the 48 states that comprised the United States at that time. Communities of the faithful had worked toward the creation of these parishes, and the Church hierarchy in Athens and Constantinople supplied priests in response to requests they received from America.

Since 1908, jurisdiction over the Greek Orthodox parishes in America had been in the hands of the Church of Greece, but little was done to extend its involvement in this country until June 1918......