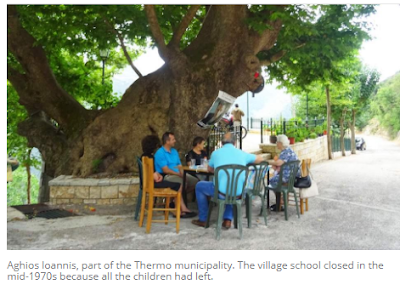 
At an elevation of 1,000 meters, Aghios Ioannis is set in an idyllic mountain landscape. Vassilis gets emotional when talking about his youth. “In the 1960s, when I was in first grade, the village school had more than 70 students. Among those, nine were my siblings. All the families in the village back then were big. The school was right across the street from my home. After school we would all help with the housework. Then the school closed during the 1970s because there weren’t any children left due to families migrating to cities or larger villages. Aghios Ioannis and the neighboring villages started to become deserted,” he told me....
What was life like in the 1960s when you were growing up here?
Things we now take for granted simply did not exist. We grew up without electricity. We would study and read under the light of an oil lamp. Our mothers would use an iron heated by coals to press our clothes. The village had one phone. My father was in charge of it. The longer the distance of the call, the harder it was for it to go through. You couldn’t simply make a direct phone call. The village phone was in operation until as recently as 1990. Of course there was no TV, but we did have a radio. I remember listening to the announcements about people who’d gone missing that were put out by the Hellenic Red Cross.
Were your parents also from Aghios Ioannis?
No, they were born and raised in Sello, a village that’s about a 45-minute walk from here. In the 1950s and 60s more than 80 people lived there, but nobody lives in Sello now. Its residents moved away and by 1989 it had vanished from the map. Wherever there was arable land, they grew fir trees. Abandoned homes that are still standing are now covered in greenery and a sign on one indicates there was life there as recently as 30 years ago. Those who grew up in these villages walked a lot. Even when electricity arrived in the area, it only did so through their own hard work....."
READ ENTIRE ARTICLE - http://www.ekathimerini.com/222594/article/ekathimerini/community/greek-villages-are-vanishing