The Role of the Greek-American Kafeneion in the History of U.S. Crime 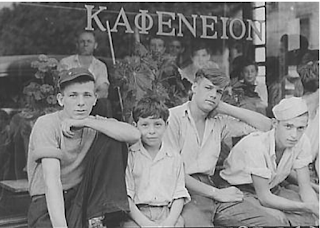 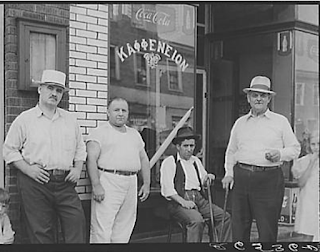 THE ROLE OF THE GREEK-AMERICAN KAFENEION
IN THE HISTORY OF U.S. CRIME

Published in The National Herald, September 13, 2014

CHICAGO- Donald Mellet had just parked his car in the garage. Arriving home a little after midnight, Mellet stepped out of the garage walking toward the kitchen door. Shots rang out with two killing Mellet immediately and several others peppering the kitchen door. His wife and two daughters barely escaped injury or death as the stray bullets traveled through the house.

The July16, 1926, assassination of Mellet was one of the most publicized crimes in the 1920s. Mellet, the crusading editor of the Canton Daily News, had embarked on an anti-vice, anti-crime campaign in editorial after editorial. For nearly two years, Mellet asserted that an alliance between local gamblers, bootleggers, and police was at the core of Canton, OH’s unbridled crime wave. At the time of Mellet’s, murder 14 other killings had already taken place in Canton, in recent years, all unsolved. The national press rallied around their fallen colleague in a firestorm of news coverage.

George Psilias, aka George the Greek, the owner of a Greek coffeehouse in Canton, was the person first sought for questioning in connection to the murder. On July 19, a nationwide manhunt was initiated for Psilias. That very day Psilias surrendered to the Pittsburgh, police appearing at their headquarters with his attorney, Samuel Silverblatt. As the investigation began, for the national press, “with the mention of Pittsburgh gunmen and of ‘coffeehouses’ in Pittsburgh, Canton and points between, it became evident that an inter-city underworld feudal system was being brought into the inquiry (Emporia Gazette July 20, 1926).”

Other references to Greek coffeehouses as the sites and even centers of criminal activity were also made during this investigation. At first I took this simply as blatant racism. Coffeehouses and Greek Orthodox churches are often mentioned in the same line as the very first community institutions, vital to immigrant life. Theodore Saloutos, the Dean of Greek American studies, after extensive research into an array of immigration and census records reported that statistically half of all Greeks who stayed in North America from the 1880 to 1920 era of migration never married. For the majority of these men, it is safe to say, the Greek-owned and run kafeneia became their primary social center.

During the era of President Roosevelt’s New Deal, various new programs were established to help the country lift itself out of the Great Depression. The largest of these new government agencies was the “Works Progress Administration (renamed in 1939 as the Work Projects Administration (WPA)… employing millions of unemployed people (mostly unskilled men) to carry out public works projects, including the construction of public buildings and roads.

In a much smaller but more famous project, the Federal Project Number One, the WPA employed musicians, artists, writers, actors and directors in large arts, drama, media, and literacy projects.” Some of the most famous and recognizable of the WPA photographs were of Greek coffeehouses from all parts of the nation.

Then, as the investigations into Mellet’s assassination continued Psilias was quickly acquitted. While controversy still surrounds this murder eventually four people, including the Canton police chief at the time, were sentenced to life imprisonment. The police chief, however, was later acquitted. The ensuing reforms, engendered by Mellet’s editorials and unquestionably his death, led to the awarding of the Pulitzer Prize to the Canton Daily News in 1927.

Donald Mellet is honored in the cornerstone of the Canton Daily News Building now housing the Canton Repository. A host of other awards were awarded to the memory of Donald Mellet.

As for George Psilias, he disappears from the pages of the American press as quickly as he arrived. That is until 1933, when he was killed in Massillon, OH in what was called a “revolver” duel with another Greek, Gus Regakis.

Racism was one thing, but the continuous references to Greek-American kafeneia as so obviously the scenes of crime, given the language used, seemed based on some commonly-understood information, not being referred to in these news accounts since they were so well know, at the time.

As it turns out Greek coffeehouses were, in point of fact, locations of a wide array of crimes. There is no point in denying that such crimes took place. If we are to fully understand how Americans view Greeks in the United States, especially in small towns, then we cannot deny these events. They did occur but they were not the national norm. That said, it is important to note that Greeks gambled and drank alcohol (in one form or another) in coffeehouses across the nation. They still do. From 1920 to 1933, a law against the sale, production, importation, and transportation of alcoholic beverages existed and was enforced in the United States. Known simply by the word “prohibition,” local police and sometime federal officers raided Greek coffeehouses where/when Greeks were making their own alcohol. This act was known as “bootlegging,” and many Greek coffeehouses, here and there across the nation engaged in this illegal act.

Another commonly-reported event was when Greeks were accused of crimes they would very often go to coffeehouses to seek aid from family and friends. So we can find articles about criminals being “harbored” in Greek coffeehouses. Greek coffeehouses were frequently robbed and most often at gunpoint. At times, the Greeks being robbed fought back and even shot back. Shooting and stabbings were also commonly reported in Greek coffeehouses. Another reported “crime” were heath code violations although these may well have been invoked simply to harass (with the hope of removing) Greek coffeehouses from certain business districts.

Other crimes reported involving Greek coffeehouses include counterfeiting, drugs, and white slavery. White slavery, for a very brief period of time, in American history meant the intentional “corruption” (as it was then called) of young American-born women by any and all immigrant men.

Greeks, as well as other immigrant men, were very often arrested for simply being with a native-born American woman. This protection even extended to prostitutes. The infamous 1909, Anti-Greek race riot in South Omaha, NE was sparked when a policeman named Edward Lowery attempted to arrest John Masourides, a Greek with “a young woman.” The young lady in question was a prostitute and as Lowery engaged the couple (and how all this took place varies from one account to another) the Greek eventually shot and killed the officer. According to accounts in the New York Times, not long after some 3,000 angry Omaha Anglos were responsible for killing one Greek boy, displacing the entire population of Greektown and burning down the Greek neighborhood in South Omaha.

For the Greek White Slavers, their “den of iniquity” of choice was the coffeehouse. Here two examples from different cities: “Mason City is still reaping the reward of importing the Greeks into that city. The police have just unearthed a resort of vice there in connection with a Greek café where twenty young girls had been enlisted in one way or another into lives of shame and living under the threat of their lives in this white slave den. Most of them are under eighteen years of age (Iowa Recorder October 29, 1913).”

As the Greeks of Mason City, IA recall these young women (and the number was far less than twenty) were hired as waitresses in several local coffeehouses and restaurants. A historical point worth remembering is that when the “mighty and brave” Ku Klux Klan wanted to close down a Greek-owned business in their town the first thing they did was try and convince the Anglo waitresses to stop working for Greeks.

Here is one more account: ‘In the last few months a ring of Greek white slavers operating extensively in Kansas City has been broken up, its members scattered and nine deported. Papers for the deportation of another have arrived from Washington and the evidence against the eleventh has been sent to the immigration officials at the capital. Many of these were saloon men, principally on the North Side. Some belonged to the more dangerous class of cadets, with no business or occupation, and these are all young men. Their headquarters frequently were in the Greek coffee houses. Recently, American girls were forbidden to enter them. Some weeks ago, a young girl, waiting on a downtown corner for a street car was enticed by a woman to visit ‘friends’ with her. That night the Kansas side police found the girl, crying, in a coffee house near the Kaw river (Chillicothe Constitution January 23, 1914).’ This plague of white slavery faded as a news story. Based on racist fears and propaganda, but little else, it could not stand the light of day, even to the most anti-immigrant of Anglos.

Greek coffeehouses in the United States have a far more complex history than is now apparent. This is a serious oversight in Greek-American Studies since they clearly formed such a central role in our collective history and experience.