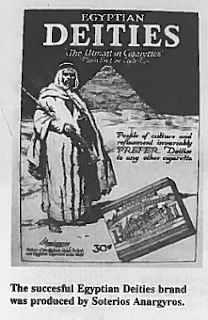 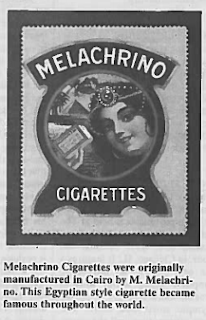 Between the mid-1880s and the end of World War I, Greek-owned cigarette manufacturing companies sprang up in Philadelphia and Boston with the vast majority of these companies settling, ultimaely, in New York City.  Phenomenally successful, the Greek companies soon dominated the top-end of the fine cigarette market.  Specializing in hand-rolled, blended-tobacco cigarettes, Greek immigrants became immediately associated, in the American mind, with this new trade.  American Tobacco monopolies bought out the larger Greek companies as early as 1900.  For many historians these purchases signaled the end of the Greek role in the cigarette trade.  It should be stressed, however, that not all Greek operated companies sold out to the monopolies or in fact ever closed their doors.

The meteoric rise of Greeks in the cigarette manufacturing industry ocurred precisely at the moment in American history when the actual means of production exceeded consumer needs.  The problem soon became not mass producing goods but mass producing markets.  This new concern with manufacturing consumers led to dynamic transformations in American advertising.  The unexpected consequence within the cigarette manufacturing industry was that Greek merchants established a set of images that would forever change American notions of Greeks.

These Greek-owned companies spanned the gamut of one Greek starting his own business and simply supporting his family, to another who started the sam way but became a millionaire running an international company to finally an already established Greek merchant coming from the Ottoman Empire to open a branch cigarette manufacturing factory in North America.

In 1892, Telemachus T. Timayenis opened a cigarette manufacturing establishment at 25 Vanderwater Street in New York City.  Mr. Timagenis is a sinister figure in American history.  This Greek immigrant's actions as merchant, writer, lecturer, tutor, and publisher are too complex for this account.  Still, it must be noted that Mr. Timayenis occupies the dubious role of being the first individual to publish anti-Semitic material (in g tEnglish) in North America.  According to the Boston City Directory, by 1904, TT Timayenis & Co. opened a "cigarette manufacturers" business at 404 Atlantic Ave.

In Bishop Burgess' "The Greeks in America," we encounter a ploy practiced on the army officers of the United States in 1898 (that as we shall see was first practiced by another Greek-owned company on the British army):  "(J)ust before the Spanish War, two Greek brothers by the name of Stephanos, peasants from Epiros, started this business on a capital of $35.  They began by bying a few pounds of tobacco and rolling cigarettes.  During the Spanish War they sent, as presents to the officers of the United States army, boxes of their cigarettes.  This happy advertising expedient set the ball rolling, and in ten years they were millionaires.  Now they own one of the largest cigarette factories in the country, in which they employ some hundred of their fellow countrymen.  This is on Walnut Street, Philadelphia.  As smothing Americans know, the Stephanos cigarettes are sold all over the country and are of a high grade."

Other Greek American historians name additional companies.  Between 1895 and 1896, some ten Greek-owned companies operated in New York City.  The most prominent of these enterprises were operated by Contopoulos, Volvi, Varoni, Poulides Brothers, and the Condaxopoulos Brothers.  While Constantine Poulides has been mentioned already, the location from his factory eventually moved from Beaver Street to 69 Pearl Street.  In this new location, in the financial district near Battery Park, this family of tobacconists made their extremely popular Mignon No. 1 cigarettes.  Other New York City-based individuals and companies always mentioned include:  the Antoniedes Company, B.D. Dungundzis, Ery Kehaya (who was the main stockholder and president of the Standard Commerical Tobacco Company and the Axton-Fisher Tobacco Company), the Pialoglou Brothers, and the firm of Z. Vassilades.  All in all, some thirty Greek-owed cigarette and tobacco companies were eventually established in New York City during this period.

Another problem with this whole are of study is that with some of the smaller companies we cannot determine if they were merely distributed in the United States or if they were also manufactured here.  Notaras' Egyptian cigarettes were a popular brand at the turn of the century but it is unclear from available accounts whether this company manufactured cigarettes here or simply distributed them in America from elsewhere.

In other cases, we know exactly what took place.  With Cairo-based cigarette merchant Theodoro Vafiadis, for example, we know that he elected in the 1870s to have his Vafiadis Cigarettes brand distributed in the United States by the Liggett & Myers Tobacco Company.  Beginning in 1870, Theodoro Vafiadis first began manufacturing cigarettes in Cairo, with branch factories in Calcutta, Bombay, London and Rangoon.  He advertised them as "Purveyed to the Household of the Khedive, the Imperial Court of Austria-Hungary, His Royal Highness Prince Philip of Saxe-Coburg-Gotha, The Imperial Court of Japan, etc., the principal clubs and the regimental messes of India, Burmah and Canada (see www.wclynx.com)."  In 1916, Mr. Vafiadis granted L&M permission to manufacture his Vafiadis Cigarettes in the United States.

James A. Shaw asserts that "G. A. Georgopulo & Co., Inc. was the agent for the Turkish State Monopoly in the United States.  George Georgopulo and his brothers Basil and Theodore made their high quality cigarettes at 48 Stone Street, a very old fashion building tucked into the Wall Street financial district of lower Manhattan.  Tobacco workers in this small four-story factory made luxury cigarettes for members of America's exclusive private clubs, and a few other discriminating smokers.  The brothers liked to tell visitors to their factory that Admiral Byrd took Georgopulo-made cigarettes with im on his historic South Pole expedition," (see www.wclynx.com/burntofferings).

Two popular brands long associated with the Georgopulo Company was Jakarta clove flavored cigarettes and Jezebel, which was a colored and perfumed party cigarette made from fine Turkish and vintage sun-cured Virginia tobaccos.  G. A. Georgopulo & Company first made Jezebel in 1955.  In 1992, manufacturer G. A. Andron, successor to G. A Georgopulo, felt that playful contemporary graphics would enhance the festive nature of the colorful cigarette.

Cigarettes also prompt memories of nostalgia.  Here is a fragment recalling school day memories of the mid-1940s:  "The only one who had cigarettes was George Georgopulo.  His father had a tobacco store in New York City and sold foreign tobaccos.  George would put these Turkish cigarettes ina Lucky Strike pack or in an empty Camel pack, so when someone lit up a smoke, they nearly died (www.lafayetteexperience.com/alumni/class_notes/1945.html)."

In 1869, Nestor Gianaclis was the first important Greek tobacco merchant to leave Constantinople and establish himself in Egypt.  It is necessary to stress that Mr. Gianaclis arrived before the Ottoman-imposted monopoly.  Nestor Gianaclis could not have foreseen what was to unfold on the world market.  Yet Mr. Gianaclis was destined for unimagined success.  We need only to turn to the pages of Alexander Kitroeff's, "The Greek in Egypt 1919-1937 Ethnicity and Class," (Ithaca Press, London; 1989), to see how this came about:  "For a dinner party he was giving for British officers in Egypt, the Khedive Tawfiq ordered 50,000 cigarettes from his supplier, Nestor Gianaclis, who was a major manufacturer in Cairo.  The officers liked the cigarettes so much that next day, they sought out the Gianaclis factory to buy more.  They were surprised to find that the "factory" was nothing more than a small shop in the Rue de Mousky."

Soon Mr. Gianaclis was claiming the honor(which we can be fairly sure he paid for) of being the one cigarette manufacturer "By Appointment Purveyor to H.H. The Khedive of Egypt."  This claim can still be seen prominently printed on tins of his cigarettes.

In 1905, the high tax on finished imported cigarettes forced Mr. Gianaclis to open his second factory on Roxbury Street in Boston.

As noted in "A History of the Greeks in the Americas 1453-1938, (Proctor, Ann Arbor:  1995), Miltiades Melachrino, who was known as Michael Melachrinos in New York circles, "came from Egypt not as an immigrant but as a well known manufacturer of Egptian cigarettes.  He established a branch factory in New York and succeeded in finding a market for his products within a very short period of time.  He made a fortune, and eventually left the country.  But his cigarettes are still in the market."  According to James A. Shaw, in 1904 Melachrino, "decided to expand his operations to the United States, and began making his Egyptian style cigarettes in Factory No. 649, 1st District State of New York.  Melachrino No. 9 and the slightly larger Melachrino No. 4, Plus Non Plus Ultra Cigarettes, were tobacconist Melachrinos most popular brands.  His business, M. Melachrino and Company, and the different brand names, were sold to the Tobacco Products Corporation about 1913.  Miltiades Melachrino started a second cigarette manufacturing company in New York during the early 1920s.  Crocodile Cigarettes, Miltiades Cigarettes, and Silver King Cigarettes were made in Factory No. 1016, 3rd District New York from 1923 until 1928.  Mr. Melachrino advertised that this new company had 'No connection with other firms.'"

Melachrino Cigarettes celebrated their 50th anniversary in 1929.  In celebration, the company offered two boxes of Melachrino No. 9 free when a flat 50-tin was purchased.  This special offer came packaged in an elegant gold jubilee cardboard box.  Melachrino Cigarettes were originally manufactured in Cairo by Melachrino.  We cannot over stress the fact that this Egyptian style cigarette became famous throughout the world with some considerable help from the British Army.  When soldiers that had been stationed in Egypt were transferred to psts around the glove, their enchantment with Melachrino and the other brands of Greek blended-cigarettes never flagged.

Aside from the physical manufacture of tobacco products, Greeks established enduring stereotypes related to smoking that are still common motifs.  One thing we need to stress is that the Greek manufacturers of these hand-rolled cigarettes were especially proud of their products.  As such, they put their names on many of the packs, boxes, and tins of cigarettes they sold.  You can go to any antique shop, ebay, or outlet for specialty idems and purchase your own pack, box, tin or advertising page of Melachrino, Royal Nestor and virtually any of the Greek cigarette brands mentioned in this article.

These packs, cardboard boxes and tin boxes are readily available for between $5 and $20 a piece.  At other times, as highly valued collectables, certain items are often quite expensive and difficult to find.  Yet on virtually all these packs, boxes, or tins of hand-made cigarettes you can see the printed signatures of these very proud Greek cigarette manufacturers.

The advertising images found on the Greek-owned cigarette companys will be closely examined in our last installment.