The Japanese at Smyrna: Tokei Maru, 1922 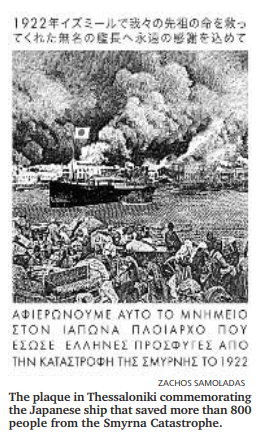 Published in The National Herald, August 4, 2018


A fascinating aspect of the Smyrna disaster of 1922 was the unanticipated appearance of a Japanese freighter that evacuated more than 800 Greeks and Armenians at a time when other nations would not. The name of the ship, its captain, and why it was in Smyrna that fatal first week of September has never been clarified.

A critical historical breakthrough regarding the ship was made in the past decade by Stavros Stavridis. a frequent contributor to this newspaper. By examining the back issues of two Athenian newspapers, “Eleftheros Typos” (September 4, 2008) and “Impros,” (September 6), he found the name of the Japanese ship rendered as Tokei Maru.

The work of Stavridis and other scholars has now been enhanced by Nanako MurataSawayanagi, a history professor at Tokyo University who seeks to write a definitive history of the matter. Murata-Sawayanagi is fluent in English, Japanese, and Greek. As will be noted at the end of this article, he is requesting assistance from GreekAmericans who have knowledge of the ship.

The spine of the story is that a Japanese freighter came to the port of Smyrna in early September, 1922 when the docks were already crammed with thousands of Greeks and Armenians fleeing a Turkish army that seemed intent on slaughtering as many of them as possible. Foreign ships in port would only rescue their own nationals. Greek boats were absent due to fear of being captured.

The captain of the Tokei Maru was so appalled by the sight of the desperate refugees that he is said to have dumped all or most of his cargo to take on anyone who could reach his ship. Once the Tokei Maru reached capacity, he transported the refugees to Piraeus and transferred their care to the Greek government.

The strongest testimony about the ship was written by U.S. Consul General George Horton who reported on the ship in an official dispatch to the secretary of state. His report does not indicate first-hand witnessing but is based on primary sources available to a consul general. Horton emphasized that the Greeks were deeply moved by the “the kindness of the Japanese officers and men.”

“The New York Times published a story on the ship’s role on September 18. Although the Times is a credible source, it is not clear if this story was a firstor secondhand account. The Atlanta Constitution published a story on October 15, citing Atlanta John Owen, who had been present at the harbor. His testmony, however, is tainted in that he refers to a Japanese warship as well as a Japanese freighter. In December, Anna Harlowe Burge, the wife of a professor at the International College of Smyrna told the Boston Globe of her firsthand knowledge of the ship.

Christos Papoutsy in his Ships of Mercy states he contacted the Japanese government about the possible presence of Japanese vessels. Told that there were no Japanese warships in the region, he concluded that the warship is a myth but that quite possibly, “a merchant ship provided aid at Smyrna.” Marita-Sawayanagi confirmed that the Japanese government had a strict policy of avoiding any military presence west of the Suez Canal.

Stavridis perused The Japanese Times and Mail, an Englishlanguage newspaper published in Yokohama and found that there had been a group of Japanese freighters operating a Port Said-Marseilles schedule. Smyrna was not on that route, but it is easily imaginable that there was an unexpected side delivery or that the ship was doing some “private business.”

Murata-Sawayanagi has added two new elements to the story. He has examined Japanese shipping records and found a ship named Tokei Maru and another named Tokai Maru that were in that region at that time. More spectacularly, he has found a photo of a ship flying the Japanese flag in Smyrna’s harbor, but given the placid dock scene, this was not a photo taken during the panic of September. Murata-Sawayanagi’s preliminary findings are available in Mediterranean World (#23, 2017) published by Hitosubashi University. That essay will be reprinted in the next issue of the social policy journal of the American Hellenic Institute that will be available in January.

One ambition of Murata-Sawayanagi is to discover the name of the captain of the ship. He is using Japanese social media to ask descendants of the captain or crew to contact him. He is hopeful that letters, diaries, or oral histories will emerge.

Murata-Sawayanagi also seeks accounts of the ship by Greek-American descendants of the survivors. He is hopeful there may be written records of some kind, such as family histories or diaries. Just as important are oral accounts the survivors told to their children, relatives and friends. I have corresponded with him about the memories of my mother who was one of those saved by the Japanese. In his follow-up queries, Murata-Sawayanagi asked how my mother, then only a child knew her saviors were Japanese; how she reached the ship; her immediate reaction; and her long-term memories of the crew.

When I suggested to Nanoko Murata-Sawayanagi that I write in this column about his quest to involve more Greek Americans in his research, he was delighted at the prospect. He asks that anyone with any stories or data about these events to contact him at murata@toyo.jp

Prof. Georgakas is Director of the Greek American Studies Project at Queens College – CUNY and Consulting Editor of CINEASTE magazine.