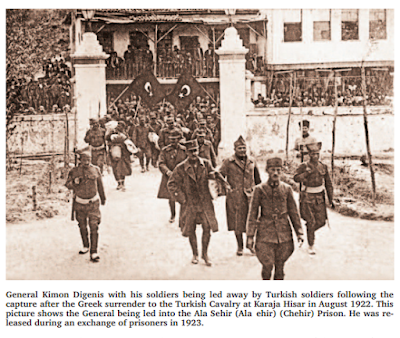 At the end of the Greek-Turkish war in September,1922, the Kemalists detained Greek males aged 17-45 and deported them to work in the infamous labor battalions in the Anatolian interior. The vast majority of these were Anatolian Greeks and also captured Greek soldiers. These men suffered terribly at the hands of their Turkish captors with many of them perishing from thirst, disease, exhaustion, exposure, and beatings.

The two Greek-American daily newspapers – Atlantis and National Herald – published an account of Greek prisoners of war and interned civilians detained in Turkey in January, 1924. The information was sent via letter from Athens dated December 25, 1923.

James H. Crutcher of the Near East Relief tried to ascertain the number of Greeks who had perished or survived in the Anatolian interior. He quoted official statistics that the 1,800 who left on the ship named Archipelago in December, 1923 were the lucky ones out of a total of 25,000 prisoners. Those fortunate individuals were returned under the 'agreement respecting reciprocal restitution of interned civilians and the exchange of Prisoners of War signed at Lausanne, January 30, 1923. Some parts of this agreement was included in articles 119-128 of the Treaty of Lausanne signed July 24, 1923.

The articles highlight the number of survivors in each labor battalion. Those employed in labor battalions were engaged in road construction, repairing damaged buildings and bridges, cutting timber or working as laborers. Many collapsed and died from over-work and exhaustion or if anyone stopped momentarily to take a breather was severely beaten or hit by the end of a Turkish rifle butt.

In the 6th labor battalion 5,000-6,000 left Smyrna with only 1,800 arriving in Magnesia. Out of these 1,400 were transferred to Soma with others being sent to Ankara, Iconium and other places. One hundred sick prisoners remained in Turkish hospitals. A total of 542 of the 6th battalion were delivered to Smyrna consisting of 252 from Ankara, 90 from Iconium and 200 from various locations close to Ankara. An admission into a Turkish hospital was tantamount to a death sentence due to a lack of medicines and insufficient medical staff to take care of the sick Greek prisoners and civilians. The hospitals were overcrowded and filthy. In many cases, Turkish doctors had no sympathy or cared if there Greek patients died.

There were 2,000 prisoners assembled in Salihli who formed the 7th labor battalion with a further 75 prisoners from Magnesia being added to this number. They were transferred to Angora where only 1200 arrived. From Angora, 175 were sent to Casaba , 120 to Magnesia and 150 were hospitalized in Ushak. At the end only 145 survivors from Angora and Casaba arrived in Smyrna. In the 8th labor battalion, 600 prisoners were originally sent to Magnesia from Smyrna with 300 and 90 of them being sent onto Aidin and Angora respectively. The rest stayed in Magnesia. Only 15 from Angora were delivered to Smyrna.

The 9th labor battalion had 1,100 arrivals in Aidin with 185 of them transferred to Sparta where 80 of them only arrived alive. Out of 300 sent to Angora only 200 were delivered to Smyrna. The whereabouts of the remaining prisoners was unknown. Many Greek families were never able to trace the whereabouts of their loved ones despite the efforts of the Greek Red Cross and Greek Government.

Another aspect of the news report highlighted a group of 300 prisoners escorted from Smyrna who were massacred at Kritik Dere outside Magnesia. One lucky prisoner escaped death and returned to Smyrna where he joined up with 1,500 from Ahmetli and Magnesia who departed with the last mission for Piraeus.

According to these two news reports, the figures cited were indeed frightening when one considers thousands of people were exterminated in the most frightening manner. Those who survived their ordeal considered themselves fortunate to be reunited with their families in Greece. However, there were Greek families who had no closure and lived with the pain of not knowing what happened to their loved ones.