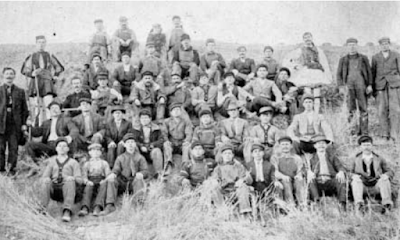 Railroad work has a special place in Greek American lore. There is hardly a Greek American family with roots in the Great Migration of 1880-1924 who does not have a story about its ancestors working on the railroads. In the late 1880’s up until the end of the First World War, Greek immigrant laborers streamed out to the American West to work in smelters, mines and to help build the ever-expanding railroad system.

What is not so readily recalled, however, is the daily violence and danger common to the American workplace of the early 1900’s. The Robber Barons, the great nationwide monopolies, and the efforts of organized labor to overthrow what they called “wage slavery” all occurred exactly when Greeks arrived and first established themselves in this country.

Given the violent social and economic upheavals of the day, it is then all the more curious that Greek involvement in labor disputes is all but lost from our history. Helen Zeese Papanikolas, Zeese Papanikolas and Dan Georgakas remain virtually alone in studying Greek participation in the American Labor Movement.

Plainly stated, cheating workers out of their wages, and paying them as little as possible to begin with, were common business practices of the day. Miners were short-counted on the amount of coal they dug. These same men were made to do the tunneling work so fundamental to the operation of the mines, but since it did not directly involve bringing ore out of the earth, they were not paid for this labor, no matter how long it took. On the railroads, men were hired to do work in extremely remote locations, and then once the work was completed, they were paid, and then abandoned.

If any of the laborers wanted to get back to a town or city, they had to pay the railroad for a ticket. At times, if the railcars or engine were needed somewhere else, the men were simply left to fend for themselves no matter where they were at that moment in time.

Some of the first photographs Helen Zeese Papanikolas used in her articles generated considerable consternation among Greek Americans. The objectionable images showed large gatherings of Greek men dressed in suits, flowers behind their ears, often at picnics holding up lambs on spits, as well as handguns drawn and pointed upward. Seeing so many guns among those Greek workers provoked sharp reactions and many a negative comment from Greek Americans. The real question is not how many such photographs were taken, still exist or should be shown, however. The real question is, why the guns at all? And it is at this point we enter into the largely unexplored country of Greek immigrants and American labor history.

It is stunning too read on the Internet how much attention has been paid to Thomas W. Gallant’s editing of George Treheles and Michael Vitopoulos’ account, “The 1918 AntiGreek Riot in Toronto.” A documentary of this riot is apparently in some stage of production (www.arts.yorku.ca/hist/tgallant/Th omasGallant.htm). Anti-Greek attacks and large collective action by Greeks called ‘riots’ in the local press can easily be located anywhere in the nation.

It is critical to understand that Greek immigrant laborers could appear out of nowhere anywhere in the American West. The citizens of a small city or rural town may have never seen a Greek one day, and the next day, literally hundreds could be found milling around the streets. In the March 24, 1902 column, “Crumbs of Information,” in the Daily Nevada State Journal in Reno, we learn how, “The town was flooded with Greeks laborers yesterday who came to work on railroad construction.”

In Moran, Kansas on October 5, 1904, “Late Monday afternoon, a gang of Greeks numbering 100 drove the crew of a Katy freight train into an orchard, where they hid until protection from the officers of the town, and some swore deputies. The freight was the local, and was hauling the Greeks from Bangor to Erie, where the company was taking them to work on the road. While the train was here, the engineer was at the lunch counter eating and the fireman was doing the switching for the train in the yards. The Greeks were riding in a flat car, and as the engine was pushing some cars back on the main line, the car in which the Greeks were riding was bumped rather hard, and one of them was knocked off, throwing him under the train and cutting one foot off. This angered the rest of the Greeks, and they took after the crew with rocks and anything they could find for weapons and chased them away. The marshal was telephoned for, and he deputized several assistants, who went to the station and protected the train crew from bodily harm. The marshal and his deputies went on the train with Winchesters and revolvers and rode it out of town, while others kept the Greeks from boarding the train. It looked for a time as if there would be serious trouble, as the Greeks were all armed. The Greeks were taken out of town on another train (Tri-Star, Davenport, Iowa, page 8).”

Then on October 17, 1905 “thirty-four persons were injured, three perhaps fatally, in an accident to the northbound passenger train on the Cheyenne & Northern railroad… at 10:30 AM today near Horse Creek, 35 miles north of Cheyenne. The train was rounding a curve when the smoker and day coach left the rails and rolled down the embankment, a distance of about 20 feet. The locomotive and baggage car had passed over the weak spot in the track safely… Many passengers were pinned under seats and in the wreckage, and their cries were pitiful… Those seriously injured were brought to Cheyenne in a special train, and were taken to St. John’s hospital. There were less than 50 passengers in the two cars, and few of them escaped unhurt. Many of the injured were Greek laborers, who were in the smoking car (Ogden Standard (Ogden, Utah, October 18, 1905).”

After hearing such accounts, it’s easy to understand why Greeks wanted to stop working for others and open their own businesses. But leaving rough labor was not so easily done.

During an oral history now kept at the University of Washington’s Center for the Study of the Pacific Northwest, Lavina Hartsuck recalled a chilling scene. In 1905, on a rare visit to town, Hartsuck related what had happened to Greek laborers who had given up railroad work to work in local mills:

“One day at the noon mill whistle, after a group of local men had determined to run them out of town, the Greek laborers were met and marched to the depot where they were herded into freight cars like cattle… Meanwhile, the rows of shacks near the mill where they worked, and their possessions, were burned… Grandmother and I happened to be in town… Grandmother said, ‘I never saw slaves treated as inhumanly.’ ”

Greeks soon learned they had to work together, or the companies would abuse them at every opportunity. Under the headline, “Greek Laborers Cause a Riot,” we read, “One hundred and fifty Greeks, who had been employed by the Oregon Railroad & Navigation Company repairing the road between here (La Grande, Oregon) and Huntington, completed their work for the winter a few days ago and demanded transportation to Portland. On the company’s refusal to comply, the Greeks became very belligerent. Their actions did not a serious turn, however, until they congregated at the Hotel Foley, where Assistant Superintendent M.J. Buckley and General Roadmaster William Bollins were at luncheon. When Buckley and Bollins left the hotel to return to the depot, the entire crowd followed them. The Greeks surrounded the railroad buildings, and the company’s employees were summoned, and a defense party organized. Armed with guns, revolvers and clubs, they made a sortie and soon had the Greeks routed. A few hundred feet from the depot, someone started firing, and during the next few minutes, a total score of shots were fired by both sides, two of the Greeks being severely wounded. The railroad men, whose numbers had been augmented by the marshal and several townspeople, drove the Greeks to their quarters, about a mile from town… The company has offered transportation to Portland to the men at the rate of $3 each, and is awaiting a reply (Anaconda Standard, December 12, 1903).”

Had Buckley or Bollins promised to give the Greeks free passage back to Portland when they hired them, and then conveniently forgot? Notice how all the newspaper reporters automatically assumed the Greeks were guilty and the railroad company men in the right. This was a common practice.

We have nothing to ashamed of by reading these accounts. “Nativeborn’ Americans tried to cheat us or hurt us simply because of greed and racial prejudice. We have to come to terms with this fundamental fact. Greeks may come from an honorand-shame culture, but that does not automatically mean every assault against those early Greeks was justified.