Published in The National Herald, November 24, 2018 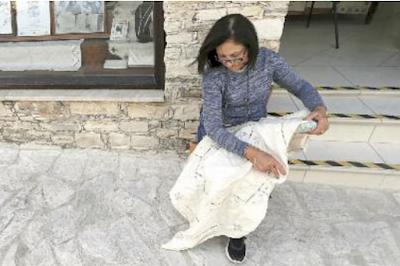 LEFKARA, Cyprus (AP) — Legend has it that the intricate needlework used in embroidery known as 'Lefkaritiko lace' was of such high quality that Leonardo Da Vinci himself bought a tablecloth when he visited this mountainous village in the late 15th century and gifted it to Milan's cathedral.

Local merchant Demosthenes Rouvis contends that the zig-zag pattern adorning the tablecloth on which Jesus Christ and his disciples dine in Da Vinci's masterpiece "The Last Supper" closely resembles those found on "Lefkaritiko" embroidery.

But this centuries-old tradition is under threat now, falling prey to more modern trends — tourists with an eye for a bargain souvenir and local workers looking for ways to make a better living.

It's a far cry from the village's heyday in the late 19th and early 20th century, when merchants fanned out around the world to sell the costly cloth.

The skills involved in handstitching the embroidery that uses Irish linen and French thread have been passed down from generation to generation for some 600 years. The art was taught to Lefkara women by Cyprus' former Venetian rulers when they vacationed in the village, said veteran embroider Evdokia Stavri.

But with a full-sized tablecloth taking up to two years to make and now selling for up to 4,000 euros ($4,500) and tourists increasingly settling for cheaper imitations, embroidery is fast becoming a dying art in this village, says shop owner Louis Papaloizou, whose own grandmother Elizabeth was reputed to be the first woman to journey abroad to sell Lefkaritiko lace.

Margarita Charalambous, president of the Lefkara Embroiders' Association, agrees, saying fewer and fewer local women are learning the craft because it is no longer lucrative.

In an effort to keep the craft alive, embroiderers are updating the traditional look with different colored threads and using it to adorn fashionable handbags to entice a new clientele.

But store owner Papaloizou fears that even attempts to move with the times may not save the craft as young women from the village look elsewhere for work.

"So, we're heading toward the end. Ten or 15 years at the most, we're finished. There's no future in this."

Charalambous also fears for the future.

"I'm 56 years old," she says. "I'm the youngest of those women who embroider. In 10- 15 years, I don't believe there will be anyone else to carry on creating Lefkaritika."