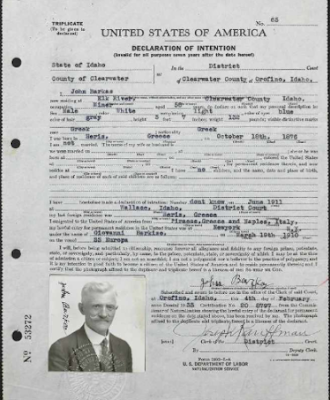 FamilySearch.org has a new FREE database titled "Idaho Naturalization Records, 1892-1990" which includes 155 people born in Greece and an additional 9 people born in Turkey.


What’s Included in this Database:
This collection contains naturalization records from the state of Idaho.
Information that may be provided in the original records includes:


Introduction to Naturalization Records:
The act and procedure of becoming a citizen of a country is called naturalization. In the U.S., naturalization is a judicial procedure that flows from Congressional legislation. From the time the first naturalization act was passed in 1790 until 1906, there were no uniform standards. As a consequence, before September 1906, various federal, state, county, and local courts generated a wide variety of citizenship records that are stored in sundry courts, archives, warehouses, libraries, and private collections. After 1906 the vast majority of naturalizations took place in federal courts.
Naturalization laws have changed over the years. These acts are important to understand as they would have greatly impacted when your ancestor was able to become naturalized, as well as the exact process he or she had to go through to become a citizen. For example, some naturalization acts required residency in the U.S. for a certain number of years, some excluded certain ethnicities from being able to become citizens, and others helped expedite the citizenship process for those who served in the military.
The Naturalization Process:
The first responsibility for an immigrant wishing to become an official U.S. citizen was to complete a Declaration of Intention. These papers are sometimes called First Paperssince they are the first forms to be completed in the naturalization process. Generally these papers were filled out fairly soon after an immigrant's arrival in America. Due to some laws, there were times when certain groups of individuals were exempt from this step.
After the immigrant had completed these papers and met the residency requirement (which was usually five years), the individual was able to submit his or her Petition for Naturalization. Petitions are also known as Second or Final Papers because they are the second and final set of papers completed in the naturalization process.
Immigrants also took a naturalization oath or oath of allegiance. A copy of this oath is often filed with the immigrant's first or second papers. After an immigrant had completed all citizenship requirements he or she was issued a certificate of naturalization. Many of these documents can be found in the records of the court in which they were created. Other naturalization records include naturalization certificate stubs and certificates of arrival. See further below for a description of these two documents.
Many immigrants took out their First Papers as soon as they arrived in America, in whatever county and state that may have been. Later they would file their Second Papers in the location in which they took up residence.
Note: In the United States, from 1907 until 1922, a woman's citizenship was entirely dependent on the citizenship of her husband. She automatically gained American citizenship when her husband became a naturalized U.S. citizen, as did the couple's minor children. However, this also meant that an American-born woman lost her U.S. citizenship if she married a man who was not a U.S. citizen. Many American-born women unexpectedly found themselves expatriated after marriage to an "alien". The Married Women's Act (also known as the Cable Act) was passed in 1922, granting a woman nationality separate from that of her husband. At this time, a woman who had lost her citizenship between 1907 and 1922 could apply for naturalization using the same process as any alien. Beginning in 1936 however, Congress made it possible for these women to regain their citizenship by simply applying to take the oath of allegiance, but only if their marriages had ended due to death or divorce. In 1940 this last requirement was dropped, allowing the women to repatriate by simply taking the oath, regardless of their marital status.