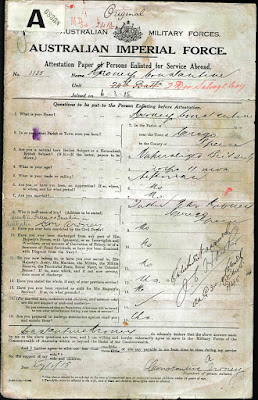 Ancestry.com has added a new database titled "Australia, WWI Service Records, 1914-1920" which includes 50 people stating they were born in Greece.

Below are the names of those born in Greece along with a detailed description of the records.  With a subscription to Ancestry.com you can view the actual record, otherwise try contacting the National Archives of Australia.


This unique collection includes service dossiers for Australians who served in the First World War in the following units:
The dossiers also include records for personnel who served in Australia rather than overseas. Records for wartime service in the Royal Australian Navy are not included.
What You Can Find in the Records
The National Archives provides the following description of what you can find in the dossiers:
The dossiers usually contain two important documents:
The Attestation Paper. This document was completed by the person on enlistment and provides the following basic biographical information:
The Service and Casualty Form (otherwise known as Form B103). This provides rudimentary details about an individual’s service and casualty history in Australia and overseas. Specific information can include:
Some files contain other miscellaneous military documents and correspondence, including:
Historical Background
These records began to be created following the outbreak of war between Britain (including Australia) and Germany in August 1914. The earliest records in the series appear to be the recruitment papers for members of Australian Naval and Military Expeditionary Force, which was dispatched to German New Guinea later in August.
In October 1914, an organization called the Base Records Office was established in Melbourne to take responsibility for the growing number of military personnel records. Before the embarkation of a unit, originals and duplicates of attestation papers, unit orders, nominal rolls and other documents were forwarded to Base Records Office. This office was also responsible for handling all queries relating to members of the above-mentioned entities. These queries could relate to such things as casualties, wills, medals, pensions, mail and personal effects during the War and for some time afterwards. Base Records Office also had intermediary records offices in London, France and Egypt that collected and kept information on service personnel. These offices closed at the end of the War, and records that were not destroyed were transferred to Melbourne.
The dossiers in B2455 were used by Base Records Office to help administer movements and pay of military personnel. Because they were essentially administrative files, these dossiers only contain the essentials of a person’s wartime service, and do not provide an everyday account of events in their military service.
The extent to which such information can be found on the dossiers varies greatly though. This is because the dossiers were subject to extensive culling in the 1950s by the Department of the Army. The intention of this was to remove from them any material that did not provide an essential record of service.