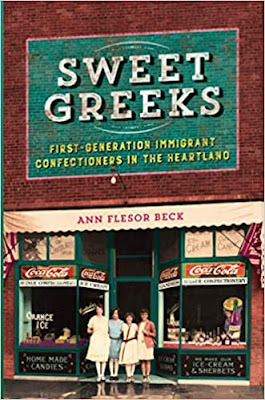 While the Greek immigrant experience in the United States has long been associated with diners and the restaurant business, many Greeks went into candy-making.

Many confectioners' shops were started by Greek immigrants in the 20th century, some of which are still operating as family-run businesses.  Sweet Greeks:  First-Generation Immigrant Confectioners in the Heartland by Ann Flesor Beck weaves together family memoir and the history of the Midwest in her book which highlights the Greek immigrant experience through her grandfather's story as a confectioner in Illinois.  The book was published in October by the University of Illinois Press and includes maps and period photographs to further enrich this enchanting and universal story of an immigrant's pursuit of the American dream.

Constantine 'Gus' Flesor came to the United States from Peloponnesus, Greece in 1901.  His journey led him to Tuscola, IL, where he learned the confectioner's trade and in 1904 opened Flessor's Candy Kitchen that still stands at 101 West Sale Street at Main Street.

Sweet Greeks sets the story of Gus Flesor's life as an immigrant in a small town within the largest historical context of Greek immigration to the Midwest.

Ann Flessor Beck's charming personal account recreates her family's history amid the atmosphere of her grandfather's candy kitchen with its aromas of chocolate and popcorn.

'To magazi' - The Store - represented success while anchoring the business district of Gus Flesor's chosen home.  It also embodied the Midwest experience of chain migration, immigrant networking. entrepreneurship in the food industry, resistance and outright threats by local townspeople, and tensions rising over the future of family-owned enterprises as younger generations decide whether or not they want to take over the business.

An engaging blend of family memoir and Midwest history, Sweet Greeks recounts how Greeks become candy makers to the nation, one shop at a time.

"This remarkable story is both unique and universal.  It is the story of tenacious immigrant entrepreneurs overcoming enormous odds to find that sweet spot, making candy that would become a permanent feature of American daily life," said Ken Albala, author of Noodle Soup: Recipes, Techniques, Obsession.

:The value of Sweet Greeks rests in its recovery of the names and personal stories of immigrant confectioners operating candy stores in small, Midwestern towns.  Once an important niche for Greek entrepreneurs, candy stores also provided community spaces.  Then they disappeared.  Could their revival breathe life into rural communities?" said Donna Gabaccia, coauthor of Gender and Migration:  From the Slavery Era to the Global Age.

"Ann Flesor Beck brings to life the workings of chai migration and networking with vivid stories of the newcomers who worked strategically to found the once-ubiquitous soda fountains of the small-town Midwest.  Embedded in the history of southeastern European immigration, nativist American prejudice, and immigrant persistence, she offers a revelatory view of immigrant generations that serves us well today," said Leslie Page Moch, author of Broad Is My Native Land: Repertoires and Regimes of Migration in Russia's Twentieth Century.

The publication of Sweet Greeks was supported by the Friends of the University of Illinois Press.

Ann Flesor Beck is a third-generation Greek confectioner and independent scholar.  With her sister, she co-owns and operates Flesor's Candy Kitchen in Tuscola, IL.