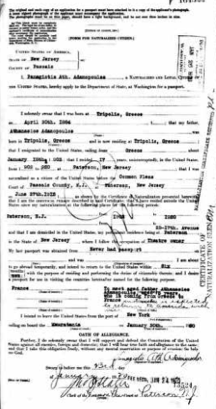 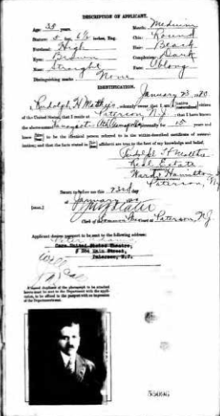 Ancestry.com has a database titled "U.S. PASSPORT APPLICATIONS, 1795-1925".   A search for all passport applications for people born in Greece resulted in 7,725 results.

You will be able to see a copy of the actual application, including a photograph of the person, in most cases.

For those of you who do not have a subscription to Ancestry.com, remember that you can access it for FREE at most public libraries.

Passport applications from 1795–1925 are contained in this database including emergency passport applications (passports issued abroad) for the years 1877–1925; special passport applications (military, diplomats, civilian federal employees, and dependents), 1914–1925; applications for extension and amendment of passports, 1918–1925; applications for certificates of identity in Germany, 1920–1921; and applications for declarants 1907–1911 and 1914–1920. It also contains passport application registers for 1810–1817, 1830–1831, and 1834–1906. Passports issued March 4–5, 1919 (numbers 67500–67749) are missing from the NARA collection and not in this database.
Although there are passport records from multiple states in this database, specific state, U.S. territory, and U.S. possessions collections are as follows:
About U.S. Passport Applications, 1795–1925
The U.S. government has issued passports to American citizens since 1789 through several different agencies over the years. For the most part, passports were not required of U.S. citizens for foreign travel until World War I, although they were mandatory for a short time during the Civil War (Aug. 19, 1861–Mar. 17, 1862). An Executive Order given in 1915 and a later act of Congress in 1918 established the passport requirement for citizens traveling abroad. This law lapsed with the formal termination of World War I and treaties with Germany, Austria, and Hungary in 1921. With the onset of World War II In 1941, the Congressional act of 1918 was reinstated requiring U.S. citizens to carry a passport for foreign travel as is required today.
Passport Applications
Passport applications can provide a wealth of information, including:
To receive a U.S. passport, a person had to submit proof of U.S. citizenship usually in the form of a letter, affidavits of witnesses, and certificates from clerks or notaries. Sometimes these additional documents are included as part of the application as is a photo of the applicant.
Application Forms
There was a variety of passport application forms used throughout the years. By 1888 there were separate application forms for native citizens, naturalized citizens, and derivative citizens (children who become citizens through their parents’ naturalization). As a result, all of the above listed information may not be available for every applicant. Likewise, there may be additional information other than what is shown above on the application form; some information may only be obtained by viewing the image of the application.
Passport Application Registers
Passport application registers may provide: