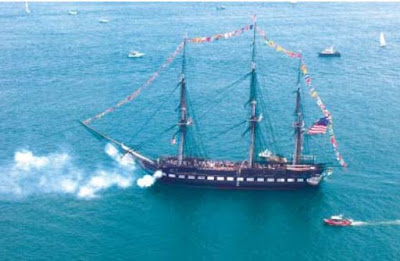 Within wider American Society, George Sirian, one of the pioneer Greek immigrants of the 1820's, continues to receive recognition in a fashion that no other Greek American historical figure can now claim. An orphan and refugee from the 1824 Ottoman massacre on the island of Psara, young Sirian was destined to lead an extraordinary life. For reasons lost to history, he has never received his place of honor in the annals of Greek American history.

Far from recalling some obscure historical individual, George Sirian's life and career have been lauded in a series of museum exhibitions, newspaper accounts, public performances and even the recent issuance of an award named in this man's honor by the United States Navy. While certainly much of this renewed interest can be attributed to the hard work of George Sirian's rightfully proud descendants, once something of this man's life and career are more generally known, the diverse attention he is now receiving speaks for itself.

During the Greek War of Independence, the massacre on the island of Chios in 1822 tragically led to the 1824 Ottoman massacre on the nearby islands of Kassos on June 8th, Ipsara (today's Psara) on July 2nd, and Samos on August 17th. These new atrocities were inflicted as revenge for the aid that these islands gave to Chians, who had fled to them for sanctuary. By all accounts, George Sirian's mother put him on a boat which was pushed out to sea from Psara, just before she was killed by the invading Turks.

According to numerous sources, young Sirian witnessed her death. He was only 6 years old at the time. The tiny refugee was rescued.

At this point in Sirian's life, we enter into disputed waters. Some accounts assert that Sirian was immediately taken onboard the USS Constitution, a ship which was to play so critical a role in the young survivor's life, yet public documentation reports that this vessel was in the Boston Harbor on the dates of the Psara invasion. At this point in history, we can not account for Sirian's presence from the time of the destruction of Psara on July 2, 1824 and his appearance in the records of the USS Constitution in April 1827.

The USS Constitution was assigned to the Mediterranean - leaving in October 1824 and coming back in July 1828 - for two consecutive cruises (without returning in between) to ensure the safety of Americans in the region during the Greek War of Independence (the Mediterranean Squadron has continuously existed from the Barbary wars to protect American interests in the region). Published accounts report that, while on the USS Constitution, young Sirian got to know the ship's purser, Lt. Robert Randolph. Sirian joined the U.S. Navy at 8 years of age. It is said that he formally enlisted into the Navy aboard the USS Constitution on April 8, 1827 when it stopped at the Aegean port of Milo. He was one of four Greek youths to climb aboard the USS Constitution, and entered the roll as a “Boy' - a recognized naval rank at the time - and was promoted to “Ordinary Seaman” by September.

Various descendants of George Sirian are keenly aware of this man's life. As one of Sirian's descendants recalls, “Exactly how, when or why George came to the attention of Randolph is pure speculation. We do know that, as Acting Purser after Timberlake died, Randolph was required by Navy regulations to be the last to leave a ship at the end of a cruise. Randolph and Sirian were the only departures on the 30th of July in 1828, thus the last departures. It is also clear that one of the 'boys' came to the attention of the officers - for example, serving as unofficial interpreter.”

Athens was being hotly contested in a series of battles at this time, and the Ottomans gained control just weeks later. Shortly thereafter, the action at Navarino took place.

It was while he was aboard the USS Constitution that “Lt. Robert Randolph took the young (Sirian) under his wing during the early years in the Mediterranean. It was the kind of friendship that, no doubt, would unlock many social doors for Sirian and bring him to Virginia as a scion on one of the commonwealth's oldest families. When they returned to the United States… Randolph arranged for one of America's foremost portrait artists, C.C. Ingham, to paint a likeness of Sirian in an (outfit) chosen by either Randolph or the artist (The Currents, January 19, 1997).” There was no enlisted uniform in the U.S. Navy at the time.

From Boston, Lt. Randolph took the Greek youth to “Turkey Island,” the Randolph family's James River Plantation near Richmond, Virginia. Little is recorded of this visit in public accounts, but it resulted in Elizabeth Randolph Sargent sponsoring young Sirian to be tutored by George Jones, a schoolmaster at Newport, Rhode Island. After his schooling, Sirian returned to the United States Navy.

“We know that George was one of only two (of the four) who gained English literacy onboard, and that he was the only one promoted to OS during the cruise. We know that Ingham signed the oil-on-canvas in 1828, requiring considerable resources to commission, and that George was formally educated in the following years. It was a known custom for families of means in the South to send their children to the Northeast for such schooling, normally of two-year duration. This combination of details leads to a reasonable assumption that the very strong family traditions surrounding that period are acceptable,” Sirian descendants told the National Herald.

“George Jones had been a private schoolmaster in the Northeast prior to being the civilian schoolmaster on the USS Constitution in 1826-1828. He is known to have had a strong interest in Classical Greek history. He apparently returned to private teaching after that one cruise. It is fully reasonable that Jones, having been acquainted with Randolph and Sirian during the cruise, led to George being chosen for the schooling. While Newport was one center of such schooling, the family tradition of 'Newport' can not be otherwise substantiated,” they added.

Here again, we enter a period in George Sirian's life about which little is recorded. From approximately August 1828 until March 1837, Sirian he had no naval service. Whether this roughly seven-year period was a time of schooling for young George only further research will determine, although it is relatively recognized that the amount of time allotted for formal schooling of that period was about two years.

“The only family tradition, beyond the schooling under Randolph's auspices, is that George was taken by Randolph to (U.S. Naval Gunner) George Marshall, who taught him gunnery,” Sirian descendants said.

Despite his anglicized name, Marshall (1782-1855) was also Greek immigrant from the island of Rhodes. He received his U.S. Navy warrant on September 22, 1822 and authored the first published American book on naval gunnery, many principles of which still exist in Navy regulations. About 1805, he married Phillippi Higgs of Maryland, with whom he had two daughters and a son, George J., who also became a USN gunner.

Curiously, while the standard accounts of Greek American history do not report on George Sirian's personal life, his naval career has seen itemization in “Officers of Greek Descent in the Union Navy, 1861-1865,” by George P. Perros in Athene Magazine (Autumn 1963, vol. XXIV, no. 3, pg. 13). When Perros' account was brought to the attention of Marshall and Sirian's descendants, however, they were more than a little displeased.

Perros' account has been published many times, and researchers can locate it whenever they wish. Since the devil is always in the details, Sirian's Navy postings in terms of the dates, events and assignments, along with his official reported service, as compiled by his descendants, are listed below. It must be noted that Marshall/Sirian descendants have more detailed information on their chart (based on Sirian's original USN documents in their possession) than what is offered below it should also be noted that ships did not generally remain in a particular location, and shore station assignments did not always continue at a particular geographic locale).

While it may not be immediately evident from this listing, Sirian served in the U.S. Navy during two wars: the Mexican War and the Civil War, during which he spent a period teaching at the Naval Academy.

During the Mexican war, he was on other ships in other locations. He was ordered by Commodore M.C. Perry personally to report from Azores to Perry's flagship at Vera Cruz. That duty was temporary, but very special. George J. Marshall (the son) died there in 1847, during the Mexican War. His body was held there for several months before being shipped to his home for burial. Perry verbally ordered Sirian to go from Vera Cruz to be with the Marshall family for the burial.

Even with this impressive record of sea duty and shore instruction, it is George Sirian's service aboard the USS Constitution, nicknamed “Old Ironsides,” for which he is most remembered today.

Throughout the extensive naval career Sirian served on “Old Ironsides” on three different occasions, and in a variety of capacities, to include Boy, Ordinary Seaman, Gunner and Master Gunner.

Old Ironsides, the legendary American naval vessel, is a threemasted, wooden hulled frigate 204 feet in length, with a beam of 43.5 feet, carrying 44 guns and displacing 2,200 tons, and having a crew of 450. It was constructed by an act of Congress in 1794. Designed by Joshua Humphreys as one of six frigates, she was built at the Edward Hart shipyard in Boston from oak, with her planks up to seven feet thick. Paul Revere himself forged the copper sheathing for the hull, and the copper spikes used to fasten the oak planks in place.

Her nickname came about “while the USS Constitution was engaged in battle with HMS Guerriere (19 August 1812) in the War of 1812. An unidentified sailor exclaimed, 'Huzzah, her sides are made of iron,' when British cannonballs appeared to bounce off her thick wooden sides. What actually occurred was the inability of 18- pound British cannonballs to penetrate the USS Constitution's hull, which is up to 25 inches thick at the waterline. Her hull comprises three layers of oak: live oak (one of the most durable woods in the world) for the frames or the middle layer, and white oak for the planking, which rests on either side of the live oak (www.ussconstitutionmuseum.org).”

What is so remarkable about the period of Sirian's naval career was that he served exactly from the “the zenith of wooden-hull sailing ships of war and their demise, as well as the rise of ironclad, steam-driven warships, to the age of steel construction (The Currents, January 19, 1997).” At precisely this cusp in American naval history, George Sirian was destined to be one of the most notable U.S. naval gunners in history

That George Sirian was the only man onboard the USS Constitution three different times does, to an extent, present some historical problems. As one of Sirian's descendants himself is careful to clarify, “Officers, such as George, were ordered to each assignment, while enlisted (personnel) 'signed on' for a cruise. In earlier times, no enlisted personnel records were maintained. Thus, it is possible that references to 'only man' might conceivably be challenged.”

The contemporary association between Sirian and the USS Constitution may well be a projection onto the past. As one of Sirian's descendant's notes, “I often think that he himself would have considered this somewhat ironic. The ship certainly holds a special place as his entry to the United States; as his longest (Around the World) cruise in 1843 to 1845; and as does his teaching on her in 1863 to 1864. But, he served on so many ships and locations, even including the orient on steel ships, late in his career.” 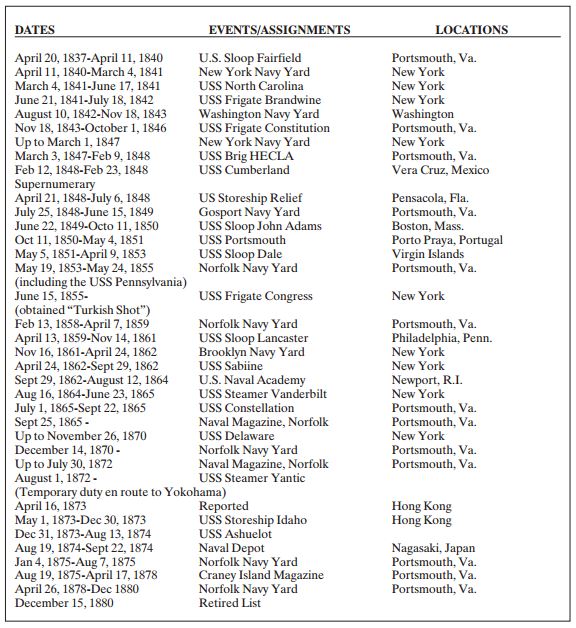