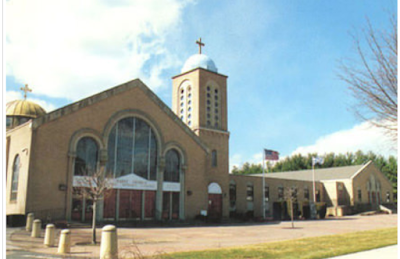 "The first Greek immigrants arrived in Hartford in 1898. By 1915, there were some two hundred Greek residents in Hartford, and by 1920 the number exceeded four hundred, only twenty-five of whom were families. The early Greek residents of Hartford were too few to support their own church; consequently, they accepted the spiritual guidance of the neighboring St. George Greek Orthodox Church of New Britain, which had been established in 1916. At the time, a chartered trolley car on special holidays such as Easter and Christmas was necessary to transport the increasing church attendance from Hartford.


As the number of Greek residents in Hartford increased, the thought of organizing their own community prevailed. In the spring of 1921, and educational committee was formed. Its sole purpose was to organize a school for the teaching of the Greek language to children of Greek families. A room was rented in the summer of 1921 on Main Street, in the old Loew's Poli Theater building. Twelve pupils attended, and Arthur Athanason was the first teacher.
During this period, several societies were founded: 1924 Pan-Rhodian Society; 1925 Greek Ladies' Benefit Society "Athena" (the forerunner of Philoptohos), Peloponnesian Society "Saint Lavra" and the Nathan Hale Chapter, No. 58 of AHEPA; 1926 Plomariton Brotherhood Society.
Visiting priests occasionally came to Hartford and celebrated the Holy Liturgy in rented halls. A community as Holy Trinity celebrated Liturgies at the All Saints Russian Orthodox Church on Broad Street in 1924-1925. Officiating was the Reverend Achilles Garifalos, who was succeeded by the Reverend Sousoulides."
READ THE ENTIRE ARTICLE - http://stgeorgecathedral.org/about-our-cathedral/cathedral-history