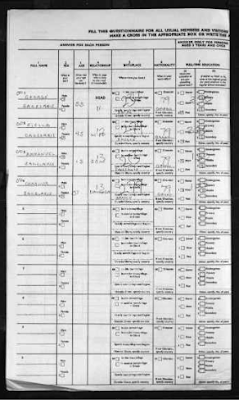 The 1984 Population Census of Ghana is a complete enumeration of the 12.3 million people residing in Ghana as of midnight March 11, 1984. The census is divided into a total of 56,170 localities. According the government of Ghana, a locality is defined as any “nucleated and physically distinct settlement.” Localities may include a single house, a hamlet, a village, town or city. In some areas of the Upper West and Upper East Regions, localities are based on traditional kinship groups. Only those individuals, including foreign visitors, who were present in Ghana on March 11, 1984, were included in the census enumeration. Due to records loss in Ghana, not all localities are represented. Please be advised that the printed date on the census enumeration form usually says 1982; the census, however, was formally conducted in 1984 and is the third post-independence census of Ghana (1960, 1970 and 1984).


The following information may be found in these records:
Census