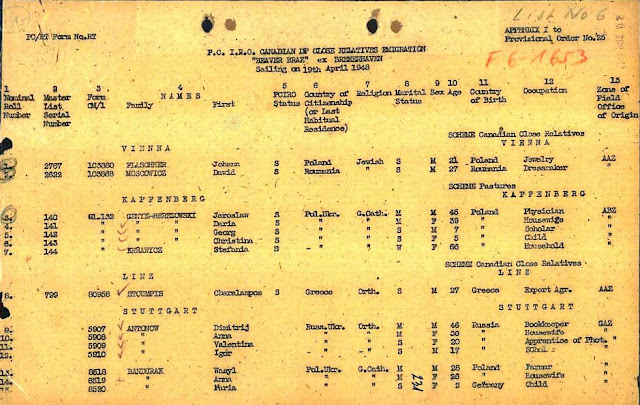 Ancestry.com ($) has a database titled AFRICA, ASIA AND EUROPE, PASSENGER LISTS OF DISPLACED PERSONS, 1946-1971 which includes 3,133 people who were born in Greece.  There are an additional 2,569 people born in Turkey, some with Greek sounding names.


The upheavals wrought by Nazi persecution and the Second World War caused mass uprooting of individuals and groups. Many of these individuals wished to emigrate from Europe in order to begin a new life – a goal supported and coordinated by the International Refugee Organization (IRO) and later by the Intergovernmental Committee for the Movements of Migrants from Europe (ICEM).
This collection consists of passenger lists of immigrants leaving Germany and other European ports and airports between 1946-1971. The majority of the immigrants listed in this collection are displaced persons - Holocaust survivors, former concentration camp inmates and Nazi forced laborers, as well as refugees from Central and Eastern European countries and some non-European countries. Many of the immigrants listed in the collection fall outside the ITS (International Tracing Service) mandate.
The records in this collection are organized by Resettlement Camp location where immigrants began their journey. These centers were the first step in their long journey.
The documents in the collections have been created by:
Publication of these documents has been made possible through partnership with the Arolsen Archives (formerly the International Tracing Service, or ITS). The Arolsen Archives are an international center on Nazi persecution with the world's most comprehensive archive on the victims and survivors of National Socialism. Their collection has information on about 17.5 million people and belongs to the UNESCO's Memory of the World. It contains documents on the various victim groups targeted by the Nazi regime and is an important source of knowledge for society today.
For assistance in understanding abbreviations and document types found in the collection, see the Arolsen Archives e-Guide which offers in depth explanations into the different forms and terminology encountered in the collection.