Book "Ten Days to Destiny: The Battle for Crete 1941" by Kiriakopoulos - Table of Contents and Greek Names 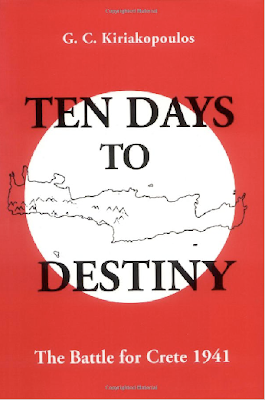 The book "Ten Days to Destiny:  The Battle for Crete 1941" by G. C. Kiriakopoulos was published in 1985 by Scholastic Library Publishing.

Below you will find the 11 Greek names mentioned in the book along with the Table of Contents.  This book is available through the U.S. Inter-library loan program, you can work with your local library to obtain a copy.


PART ONE - THE ADVENT
Chapter One - "No, It is War!"
Chapter Two - War Comes to the Land of Minos
Chapter Three - Mercury is Born
Chapter Four - "Determine the Next German Objective"
Chapter Five - "Any Day After the Seventeenth"
Chapter Six - Scorcher on Colorado
Chapter Seven - "Just a Circle on the Map"
Chapter Eight - The Hunters from the Sky
Chapter Nine - It Is Only a Rumor


PART TWO - THE ATTACK
Chapter Ten - Mercury Is Airborne
Chapter Eleven - "They Are Coming!"
Chapter Twelve - "It Was Like a Terrible Dream"
Chapter Thirteen - "It Was Magnificent, But It Is Not War"
Chapter Fourteen - "That the German Shall Not Pass!"
Chapter Fifteen - "With Axes, With Shovels, and With Their Bare Hands"
Chapter Sixteen - "Hence, They Have to Preserve My Head"
Chapter Seventeen - "Be Back by 4:30 p.m."
Chapter Eighteen - "If You Must, Then You Must"