Greeks in the 1852 California State Census 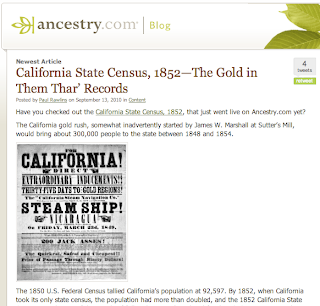 The California State Census taken in 1852 just went live on Ancestry.com.  So, of course, I had to see if there were any Greeks listed.

There were 14 people listed with Greece as their place of birth.  This was during the Gold Rush in California, not suprising, 10 of the 14 people were men listed as Miner's in Calaveras and Placer Counties in California (hotspots of the Gold Rush).  There were also 2 females listed in San Francisco, 1 in Sacramento and 1 in Shasta, California.

You can view the actual 1852 California Census Records at Ancestry.com