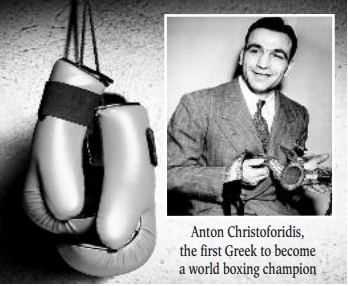 CHICAGO- Anton Christoforidis is one of the most successful professional boxers of all time. Winner of multiple middleweight and light-heavyweight titles in Europe, North Africa, and the United States, Christoforidis has long been recognized as the first Modern Greek to become a world class boxing champion. Yet such acclaim did not come easily or without considerable and sustained effort.

Christoforidis was born on May 6, 1917 in Mersin, a large port city on the Mediterranean coast of what is today southern Turkey. An interview with Christoforidis, a year before his death, offers this recollection: “when I was one month old, the Turks killed seven of the twelve members in our family, including my father. All that was left was my mother, sister, brother, a nephew and me. The rest of us were exiled to Greece in 1921 (European Stars and Stripes September 7, 1984).” Once in Greece the family eventually settled in Athens where Christoforidis began picking cotton by the age of six. Within two years of their arrival Christoforidis’ mother was dead.

other was dead. By the very early 1930s, Christoforidis while struggling to live on the streets of Athens he was even then learning to box. Unable to make a living by boxing in Greece Christoforidis, around 1933, went to Paris and immediately entered boxing circles. Very quickly Christoforidis was recognized as a very competent boxer who possessed good basic skills. At the same time it was also clear that the young Greek did not possess “heavy hands” which is boxing jargon for the ability to cleanly and consistently knockout one’s opponents. Consequently, throughout his career Christoforidis focused on his innate ability to cannily size up the moment and out-work his adversary in the ring.

From 1935 to 1939 Christoforidis fought not just in France but also Holland, Belgium, Germany, Greece and North Africa. From 1935, until late 1939, the young Greek had 46 professional fights in Europe. Various reports allege that Christoforidis’ first professional bout was against Theodore Korenyi in Athens, Greece, which he won by a second round knockout. On November 8, 1937, Christoforidis won both the Greek Middleweight and Greek Light Heavyweight titles from Costas Vassis in Athens, Greece. Christoforidis defeated EBU (European) Middleweight Champion Bep van Klaveren on November 14, 1938 in a title match. Christoforidis later said that one of the spectators of this bout was none other than Adolf Hitler.

His first title defense, for the European middleweight was against France's Edouard Tenet in Paris. Anton was ahead on points going into the eleventh round, but broke his left hand that round and was forced to finish the fight on the defensive. He lost via decision and so lost his European middleweight championship title. Yet it was his 10-round contest with Lou Brouillard, on April 5, 1939 that brought Christoforidis to the attention of American boxing promoters such as Ed Mead and other notables. Again, rather than a clean win by either boxer Christoforidis won by decision. By early November 1939, Christoforidis was brought to the United States by American boxing promoter Lou Burston.

As reported by syndicated sports columnist Jack Cuddy: “Burston considers himself mighty lucky because this Greek battler shapes up as one of the finest middleweight prospects ever to hit town. Veteran lookers-over, like “Dumb Dan” Morgan, Lou Brix and Nat Rodgers (all notable boxing promoters) predict Anton will develop into the greatest of all Greek fighters, whether born here or abroad (San Diego Union December 31, 1939).” Press accounts of this period stressed that Christoforidis was “rated among the best fighters in Europe…out of 100 fights he’s said to have scored at least forty-five knockouts” (Daily Nonpariel January 7, 1940).”

Christoforidis made his United States debut on January 5, 1940 in Madison Square Garden, defeating Willie Pavlovich by decision. After this success, for reasons not now known to history, Christoforidis settled in Geneva, Ohio. Anton next built up a six fight winning streak, which was stopped when future Hall of Famer Jimmy Bivins. Anton once said, "I won that fight; it was strictly a hometown decision." Rather than a mere brag, in a rematch held on December 2, 1940, Christoforidis returned the favor and walked off with a 10-round decision, handing Bivins the first defeat of his American career.

The Bivins win landed Christoforidis a shot at Melio Bettina for the vacant National Boxing Association World Light Heavyweight title. At this moment, in American sport’s history boxing titles were regional not national. With that in mind, Christoforidis won the NBA Light Heavyweight title-crown on January 13, 1941 in Cleveland, Ohio by defeating Bettina in a unanimous decision of a fifteen-round bout. It is with this success that Anton Christoforidis became the first Greek to become a world boxing champion. Just for the sake of a Greek-American historical perspective, at this very same moment, Jim Londos held various heavy weight boxing titles as well.

American sports writers have never been known for their innate sensitivity. So, Christoforidis’ name became a long running topic of discussion. In the end, the fans dubbed the young Greek “Christo the Fisto” while the press grudgingly admitted the young boxer’s good looks and so tended to call him the “Greek Sheik.”

But the world of American professional boxing was a volatile forum during this period. After knockout wins over Italo Colonello and Johnny Romero in nontitle bouts, Christoforidis lost his NBA title to Gus Lesnevich by unanimous decision on May 22, 1941. Although this event was not technically an NBA title fight, Lesnevich was later awarded the title by the NBA regardless on May 24, 1941. Never stopping long in his career Christoforidis next met and defeated both Ceferino Garcia and George Burnette. Then, on January 12, 1942, Christoforidis suffered his first knockout loss at the hands of rising contender and future light heavyweight leg end Ezzard Charles in Cincinnati, Ohio. On February 2, 1943, Christoforidis won the “duration” heavyweight title from Jimmy Bivins and then promptly lost it to Lloyd Marshall on April 21st of that same year. Christoforidis fought his last bout on February 18, 1947 against Anton Raadik. While accounts vary it seems safe to say that at his retirement Christoforidis’ record consisted of 53 wins (13 by knockout), 15 losses and 8 draws. At his height of his career it was not uncommon for 12,000 to 14,000 people to attend a Christoforidis bout.

A longtime resident of Ohio, upon his retirement Christoforidis ran a bar-restaurant in Geneva, OH for a good number of years. In 1961, Christoforidis and his wife were divorced and in 1968 he sold his interests in Geneva and moved to Florida to retire. In 1971, he took an extended trip back to Greece for the first time for a scheduled 45 days. However, he liked it so much, the 45 days turned into 15 years. As one might expect Christoforidis was a hero in Greece. On October 31, 1985, Christoforidis died suddenly of an apparent heart attack in Athens, Greece. Holder of at least five different European, North African and American professional boxing titles Anton Christoforidis is the first Greek to become an undisputed professional box champion.

The logical question here is why do we not hear more of this champion and the other Greeks like his contemporary Londos, who all were literally at the pinnacle of American sports?