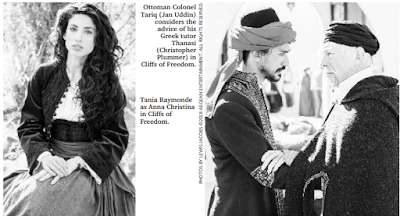 Published in The National Herald, February 16, 2019

Cliffs of Freedom opens in theaters in New York and Los Angeles on March 1 and expands on March 8 and 15.


NEW YORK – Bringing the story of the Greek War of Independence to the big screen has long been a dream for many hoping to share this dramatic period in history with as wide an audience as possible. The soon-to be-released Cliffs of Freedom represents a true passion project for Greek-American Executive Producer and Co-writer Marianne Metropoulos, who spent several years developing a story that would bring the Greek War of Independence to life for modern audiences.

Metropoulos told The National Herald, “As a proud Greek-American, I wanted to produce a feature film depicting Greece’s fight for freedom after 400 years of occupation by the Ottoman Turks. This pivotal period in Greece’s history is less known to many, and it tells of the Greek’s commitment and perseverance to achieve freedom or choose death rather than to live enslaved.”

Set during the Greek war for independence against the Ottoman Empire, Cliffs of Freedom blends eternal themes of hope, love, and sacrifice with a timely narrative about one woman’s struggle to overcome oppression and shape her own destiny.

An epic adventure in the tradition of Dr. Zhivago, Braveheart, and The Last of the Mohicans, the film leverages historical context to pose contemporary questions about the meaning of family, the limits of patriotism, the dangers of intolerance, and the price of freedom.

According to the film’s production notes, “Times of great societal and industrial change are often accompanied by political upheaval. By 1820, the Greeks’ struggle for freedom was coming to a head after centuries of oppression. The peoples of western countries were becoming increasingly well-educated and exposed to other cultures and societies. In contrast, the Ottoman Empire was clinging to power by doubling down on the same attitudes and methods they had employed for centuries. With the Turkish military forces spread thin and growing more intolerant as they faced growing uprisings all over the Empire, Greeks longing to be a real nation again sensed that change was near and inevitable.

Metropoulos said, “The two most important elements of my story are the love and loyalty given to family – to honor their memory even at the cost of one’s own future happiness, and to realize and accept that even historic enemies can bridge religious, cultural, and language differences which separate and drive hatred and war.”

Following the lengthy script development period, Metropoulos enlisted a seasoned team of entertainment industry talents to realize the sweeping story as a feature motion picture in the classic Hollywood tradition.

She said, “After meeting with various producers, I found a producing partner in Casey Cannon, who had the experience, ability, determination, and shared the vision that I had, to bring this story to the screen.”

Along with veteran producer Cannon, the production brought aboard co-writer and director Van Ling, whose more than thirty years’ experience in movies, including nearly a decade working with legendary filmmaker James Cameron, made him uniquely suited to translate Metropoulos’ story into a compelling film narrative.

“I was impressed with Van’s command of storytelling,” she said. “Along with his visual ideas and his many years of experience in the film industry, I appreciated his enthusiasm for the project and his understanding of how I wanted the story to be portrayed on film. I credit both Casey and Van with bringing my ‘passion project’ to life.”

“One of the things that drew me to Cliffs of Freedom was the opportunity to do something different,” said Ling. “When modern audiences think of Greek portrayals in movies it’s usually in terms of ancient gods or Spartans battling it out, or as a family-centric comedy a la My Big Fat Greek Wedding or Mamma Mia. Other than a few pictures made specifically for the Greek cinema, the critical period of the 19th century hasn’t been explored to any significant extent. As a filmmaker, it was my goal to do so in a way that would be compelling and accessible to both Greek and international audiences.”

Cannon pointed out that “our characters span both sides of the cultural divide between Greeks and Turks. To varying degrees they struggle with the same issues we all do: innocence vs. naiveté, selflessness vs. selfishness, love vs. hatred, trust vs. suspicion, faith vs. superstition, loyalty vs. betrayal. Like in real life, our characters are layered with doubts and contradictions that make them vulnerable and human.”

“At the end of the day, the things we have in common are more impactful than the things that drive us apart,” said Ling. “When you can find a common humanity between peoples, you can rise above the cultural hatreds that sometimes get passed down. It’s an enduring theme, and one that we hope resonates strongly with contemporary audiences.”

Metropoulos agreed, adding that “appreciating those differences can ultimately enrich all of us.”

Of the film’s strong female lead, Cannon said, “Although the #MeToo movement has raised important questions about the role of women in contemporary society, it was important to depict (protagonist) Anna Christina not as an anachronistic, post-feminist character, but as a real human being both bound and elevated by cultural traditions. She starts the film as one kind of icon in her Greek village and evolves into an entirely different kind of symbol through tragedy – but she refuses to be limited by those boundaries or to be a victim of her circumstances.”

Ling said, “We wanted to present a spectrum of male response, from the men who stereotypically see women as property, to those who grudgingly treat women with traditional but unequal respect, to those who are secure enough to welcome a brighter, more balanced and inclusive future for Greek society at large.”

Cliffs of Freedom features a diverse cast including new talents Tania Raymonde, Jan Uddin, and Raza Jaffrey as well as legendary performers like the Tony-award-winning Patti LuPone (Evita) and Oscar-winning Christopher Plummer (All the Money in the World, The Sound of Music). Several actors of Greek descent, including Billy Zane, Simon Kassianides, and Costas Mandylor, also play key roles in the film.

According to the production notes, Cliffs of Freedom is meant be seen as an homage to classic Hollywood epics like Lawrence of Arabia and Gone With the Wind. Ling said, “The Greeks are a proud and passionate people, so it felt fitting to match that level of drama to capture the spirit of Greece in that period in history.”

As Cannon observed, “In our post-modern culture of self-reference, cynicism and irony, a more traditional ‘Hollywood’ approach distinguishes our story as something refreshing and unexpected.”

Cliffs of Freedom opens in theaters in New York and Los Angeles on March 1 and expands on March 8 and 15.

More information about the film is available online: cliffsoffreedomfilm.com.