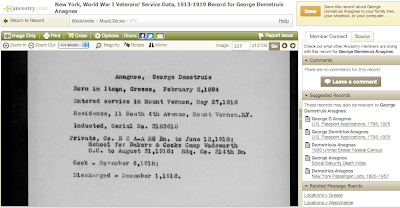 There are 13 people listing GREECE as their place of birth in this Ancestry.com database.  I have transcribed their names and listed them below.  If you do not have a subscription to Ancestry.com, most U.S. libraries offer access for FREE.


This database contains documents relating primarily to soldiers from New York who served in World War I.
Historical Background
The documents in this database were assembled by two state historians, James Sullivan and Alexander C. Flick, who were tasked with preparing a history of New York’s role in World War I. Local historians were assigned to gather materials on their communities as part of the effort. Though the history was never published, the files have been preserved at the New York State Archives.
What You Can Find in the Records
Most of the documents in this database are registrations for soldiers from New York State who served in WWI. These typically include the following details:
Though the forms have spaces for parents’ names and addresses, these have usually been left blank. The files may also include newspaper clippings, transcripts of letters, descriptions of service made by the veterans or historians, and photographs of some of the soldiers. Some details are included on nurses’ service as well, and the photographs include some women.
Other documents in the files relate to efforts on the home front by the state’s schools, faculty, students, and other organizations.
Not all communities provided materials, so there are no documents for Bronx, Queens, or Richmond counties, nor are there many entries for New York City.
Related Website
The New York State Archives was established in 1971 and opened its doors to the public in 1978. It is a program of the State Education Department, with its main facility located in the Cultural Education Center on Madison Avenue in Albany. There it cares for and provides access to more than 200 million documents that tell the story of New York from the seventeenth century to the present. From its main facility, it also administers statewide programs that reach out to state agencies, local governments and community organizations. Archives staff are located in nine regional offices around the State to address the archives and records management concerns of every area of the State.
New York State Archives

People listing GREECE as their place of birth: