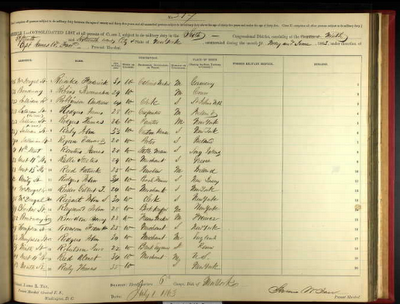 There are 39 people who are recorded with GREECE as their place of birth in this Ancestry.com database.  I have transcribed the names and listed them below for your review.  (Note:  There are also 28 other individuals who show up in the results of a search for people born in Greece.  These people have Chio listed as their place of birth, however, when I gave the actual records more scrutiny, I believe the transcriber meant Ohio.)

Please view the database directly for more information.  If you do not have a subscription to Ancestry.com, most U.S. libraries offer access for FREE.

This is a collection of lists of Civil War Draft Registrations. There were four drafts between 1863 and 1865, which included 3.175 million records. Historically, the 1863 draft was one of the most tenuous moments in the Union outside of the battles fought on Northern soil. Most of the concern was due to the draft riots that took place in New York in 1863.

These records include 631 volumes of registries and are basically lists of individuals who registered for the draft. The records are split into two different classes, Class I are those aged 20-35 as well as those 36-45 and unmarried. Class II is everyone else that registered.
The registry contains information including:
The actual draft registration records are available in NARA regional archives and sometimes contain more information than the consolidated lists.