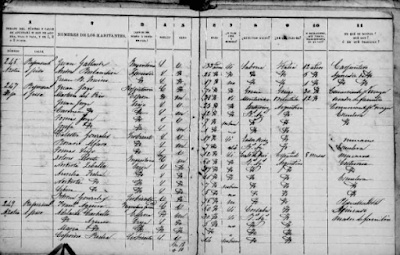 FamilySearch.org has a FREE database titled ARGENTINA, CAPITAL FEDERAL, CENSUS 1855 - there are 76 people listed as being born in Greece.  You will be able to see the actual Census page - example above.

Keep in mind that names have been changed or are in Spanish - for instance Juan Jorge - is this Ioannis Georgios (John George) - he is listed as being born in Greece.  He is 70 years old in 1855 and has been living in Argentina for 30 years.

This collection includes census records for 1855.
Each of the census registers is separated by a title page, which includes the name of the parish, the name or number of the ward, and the name or number of the block. It is followed by the enumeration sheets containing the following information in columns: Names and surnames of the inhabitants, relationship to the householder, civil status, gender, age, if the person knows how to read and write, place of birth, nationality, the length of time in the country if the person is a foreigner, and occupation or profession.
This census of the city of Buenos Aires, Argentina, was performed on Wednesday, October 17, 1855, under the direction of the then Statistics Department (Mesa de Estadística), which was directed at the time by Justo Maeso. Authorization for the census was given in July 1855 by the government council member Valentín Alsina. This census covers about 92,000 inhabitants.
For the purpose of the census, the city of Buenos Aires was divided into thirteen parishes: Balvanera, Barracas al Norte, Catedral Sud, Catedral del Norte, Cañuelas, La Piedad, Monserrat, Para Campo, Pilar, San Miguel, San Nicolas, San Pedro Gonzalez Telmo and Socorro. Each parish was subdivided into barracks and blocks.
RECORD CONTENT
The census of 1855 of the city of Buenos Aires may include the following information: