Greek Immigration to Quebec (Canada): The Process and the Settlement 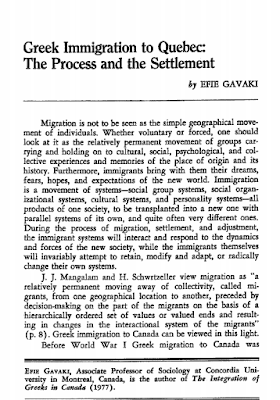 GREEK IMMIGRATION TO QUEBEC:
THE PROCESS AND THE SETTLEMENT
by Efie Gavaki

From the article:
Migration is not to be seen as the simple geographical movement of individuals.  Whether voluntary or forced, one should look at it as the relatively permanent movement of groups carrying and holding on to cultural, social, psychological, and collective experiences and memories of the place of origin and its history.  Furthermore, immigrants bring with them their dreams, fears, hopes, and expectations of the new world.  Immigration is a movement of systems - social group systems, social organizational systems, cultural systems, and personality systems - all products of one society, to be transplanted into a new one with parallel systems of its own, and quite often very different ones.  During the process of migration, settlement, and adjustment, the immigrant systems will interact and respond to the dynamics and forces of the new society, while the immigrants themselves will invariably attempt to retain, modify and adapt, or radically change their own systems. . . .

Whereas early random immigrants hoped for financial success and dreamed of an early return to Greece, the decision to migrate after the world wars carried with it the reality of permanent settlement.  Furthermore, this migration process was relatively voluntary, and the decision rested mainly on the relative deprivation created by the politico-historical and socio-economic factors in Greece at the the time - which "pushed" immigrants out - rather than on the abject poverty and destruction of the mother country, the direct threat to immigrants; lives because of political activities, or the perceived realities "pulling" immigrants to Canada.

This paper will concentrate on who the Greek immigrants to Canada were, why they migrated, where they settled, and the consequences of immigrant experience.  And although emphasis is given to Quebec, Greek migration will nonetheless be looked at from the larger migration picture in North America in general, and in Canada in particular. . . .