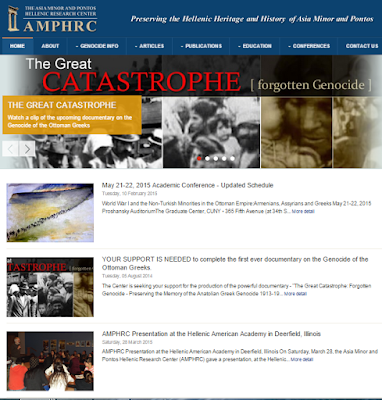 This is an interesting website - below is an excerpt from their website:
The Asia Minor and Pontos Hellenic Research Center (AMPHRC) is a 501 (c) (3) non-profit organization, whose primary mission is to research and preserve the tragic history of the Greek people who were expelled from their ancestral homelands in Asia Minor and Pontos.
The Center has collaborated with the Pan-Pontian Federation of the USA and Canada, Greek-American scholars from numerous universities, and historians from Greece. The leading Greek-American scholars have included the late Dr. H. J. Psomiades, Dr. K. Hatzidimitriou, Dr. T. Stavrou, and Dr. A. Kitroeff. The historians from Greece have included Dr. K. Fotiadis and Dr. V. Aktzidis.
In addition, the Center and its forerunner, The Pontian Greek Society of Chicago, have coordinated lectures and academic conferences in conjunction with the Zoryan Institute of Toronto, the Illinois Holocaust Museum and Educational Center, and the Armenian and Assyrian communities in Chicago.
In 2008, “The Armenian Genocide: A Model for the Study of Persecuted Peoples,” was presented by Mr. George Shirinian, Director of the Zoryan Institute in Toronto as part of “The Catastrophe in Asia Minor and Pontus,” conference. The study addressed the following issues and laid out a course of actions:
In 2009, the “Academic Conference on the Asia Minor Catastrophe,” focused on the Hellenic experience in Asia Minor, Pontus and Eastern Thrace during the early part of the 20th century.
And, in 2010, the “Megali Catastrophe” conference focused on the events that followed the catastrophe. Scholars presented original papers that were later published by the Research Center.
In 2012, the Library of the late Dr. Harry J. Psomiades was donated to our Research Center, encompassing approximately 1,000 volumes on Greek history, Asia Minor and Pontos.
In 2013, a major international conference, “The Ottoman Turkish Genocides of Anatolian Christians: A Common Case Study,” was organized by the Research Center, the Armenian National Committee of Illinois and the Assyrian Center for Genocide Studies, and was held at the Illinois Holocaust Museum and Educational Center.
Currently, there is a work for the 13 original research papers from this international conference that will be published as a book this year.

The achievements of the Greeks in Asia Minor and Pontos in philosophy, history, literature, and science continue to enrich our lives. This legacy is with us each day, and the facts and reasons behind the destruction of Greek civilization must be saved.
Scholarly work on the Armenian genocide (that occurred in the same period and territory) is well known due to the intense efforts of Armenian scholars and the Zoryan Institute. The destruction of Hellenism in Asia Minor and Pontos is largely unknown to historians outside Greece and historical literature is largely absent concerning the fate of Ottoman Greeks.
It is believed that by 1923 the pre-World War I Greek population of approximately 2 million Greeks living in Asia Minor was systematically reduced by the policy of “Turkey for the Turks.” The numbers are staggering, with 700,000 perishing and over 1.1 million being uprooted and deported during the forced exchange between Greece and Turkey.
In recent years, historians in Greece and Turkey have begun to study the events of that period. In Greece, several Greek-speaking historians are examining the persecutions of Greeks in the early 20th century under Ottoman rule. However, because their work is in Greek, historical analysis of these events has remained inaccessible to English-speaking scholars. Our proposed book project is intended to fill this gap, and advance the understanding of political violence, in general, and genocide and ethnic cleansing in particular.
Over the last five years, considerable progress has been made in reprinting and publishing historical books that are no longer available, and original research books as shown below: