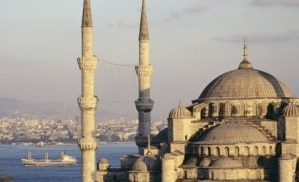 "Manuscript of Great Historic Importance Found in Istanbul" article written by Marianna Tsatsou and published in the Greek Reporter Europe on May 16, 2012.


"An important manuscript was discovered in Topkapi Palace in Istanbul. Topkapi was the residence of the Ottoman sultans for almost 400 years. The manuscript found is of significant meaning, because it consists of information regarding the years before the Fall of Constantinople in 1453, but it also describes the early years after Constantinople was turned into Istanbul and became capital of Turkey.
The document belongs to Michael Critovoulos, a Greek politician, scholar and historian, who lived between 1410 and 1470. His birth-name was Kritopoulos, but he changed it to sound more ancient Greek-like."
READ ENTIRE ARTICLE