The Greeks of Turkey: Is It Too Late? 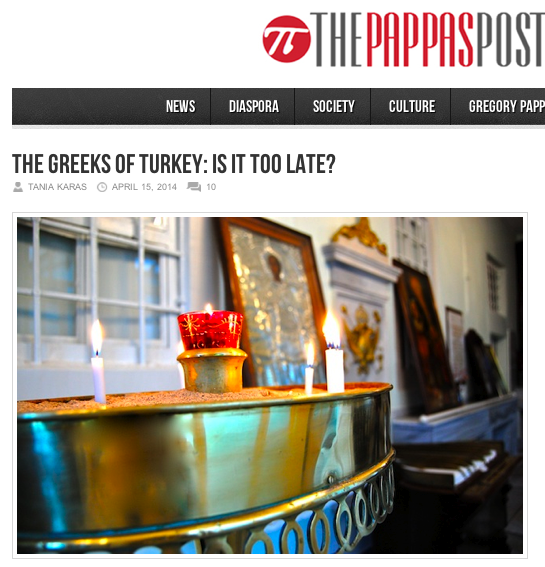 "The Greeks of Turkey:  Is It Too Late?" article was published on April 15, 2014 by THE PAPPAS POST, authored by Tania Karas,

A century of oppression has nearly wiped out a religious minority group with historic ties to the region. Improved politics offer a new ray of hope.  But with their numbers dwindling, Turkey's Greek Orthodox Christians are fighting for survival.

In the spring of 2011, Tania Karas, a 2011 graduate of Northwestern University Medill School of Journalism, received a global research grant to spend three weeks documenting the daily lives and demographic strength of the last Greek Orthodox Christians in Istanbul, Turkey.  She interviewed 20 community leaders, young people and government officials on the challenges of living within a community whose population is in decline.  The trip culminated in a meeting with Ecumenical Patriarch Bartholomew, spiritual leader of the world's 250 million-plus Orthodox Christians whose Holy See has been in Istanbul for 1,700 years.  Upon her return to the U.S., Tania tracked the community over the next 12 months.  She found that despite marked improvement in relations between Turkey and its minorities, many challenges remain.  What follow are the stories of Greek resilience and pride she discovered.