The Unassimilated Greeks of Denver - 1970 Article by James Patterson 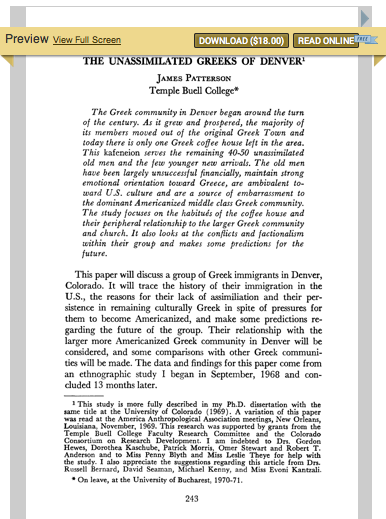 This article is available for FREE through JSTOR.org  (you will need to create an id and password) - click on the READ ONLINE FREE icon in the right-hand corner of the article preview.

The Greek community in Denver began around the turn of the century.  As it grew and prospered, the majority of its members moved out of the original Greek Town and today there is only one Greek coffee house left in the area.  This kafenion serves the remaining 40-50 unassimilated old men and the few younger new arrivals.  The old men have been largely unsuccessful financially, maintain strong emotional orientation toward Greece, are ambivalent to the dominant Americanized middle class Greek community.  The study focuses on the habitues of the coffee house and their peripheral relationship to the larger Greek community and church.  It also looks at the conflicts and factionalism within their group and makes some predictions for the future.

You may also be interested in these previous posts about Greeks in Colorado: