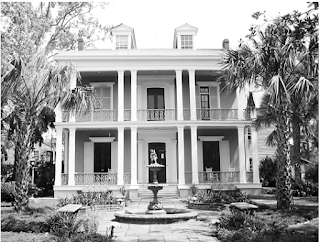 Nicolas Marino Benachi is never completely ignored in any fulllength study on Greeks in the United States. Yet beyond a few words concerning Benachi’s role in the establishment of the Holy Trinity Greek Orthodox Church in New Orleans little else is ever said. In point of fact. Benachi is the type of Greek pioneer who deserves a book-length study of his life.

Benachi engages our sustained interest from various points. First, Benachi was among that early group of Greek merchants who from 1830s until the 1880s typically represented the average Greek to the majority of Americans. Just like Benachi in New Orleans, many of these very same merchants served as consuls for the Greek government in cities across the nation (as well as Europe and elsewhere) and so were a part of a de facto foreign service.

If one has the time, The Greek Community of New York City Early Years to 1910, by the late Dr. Michael Contopoulos (New Rochelle NY: Caratzas Publishing, 1992) offers an especially fine overview of the early Greek merchants in North America. Contopoulos’ account presents the conditions and locations in which these Greek merchants conducted daily business in North America. From at least 1830, Greek merchants from the Ottoman Empire were living and working on American shores. Once here, Benachi made his livelihood in the New Orleans cotton trade with the Greek firm, the Ralli Brothers. Ralli and company were international cotton brokers with offices in London, Cairo, Athens, and India. Benachi was their representative and partner in New Orleans. Yet even Contopoulos’ fine account only adds a few remarks concerning Benachi’s partnership with other Greek merchants of the 1830 to 1860 era.

The earliest date I can find for Nicholas Benachi’s presence in the New World is in the New York Weekly Herald October 23, 1852, which documents (at least on this one occasion) his arrival from Liverpool England. Even, at that very moment, other Greek merchants such as a Ralli and a Mavrogordati are on the same ship. Once in North America Nicholas Benachi traded in anything and everything not just cotton but horses, slaves, animal pelts and in his later years he focused on real estate development while his sons, Tony and Pandia ran the Ralli offices in New Orleans.

fe and contributions of Nicholas Benachi for reasons having to do with their own local history, then the various computer sites for “Benachi Family” by the Biloxi Historical S o c i e t y (biloxihistoricalsociety.org/book /export/html/49) and the Benachi House & Gardens site (www.benachihouse.com/history) should also be consulted.

Missing from the GreekAmerican accounts is the detailed story of Benachi’s life and experiences in New Orleans, Louisiana and Biloxi, MS. Having said that it must be admitted that aside from Contopoulos’ historical account no other study exists detailing this early period in Greek-American history. Here, again, for information of this kind we must turn to local American sources and researchers who have long recognized Benachi’s contributions to his new home.

In 1812, Nicholas Marino Benachi was born on the island of Chios. Given the date of his birth, Benachi was born a subject of the Ottoman Empire since Chios did not become a part of the nation state of Greece until 1912. The Benachi family has held a prominent place in Greek affairs for literally centuries. For those interested in a longer historical view and who wish to trace Benachi and/or many of these Greek merchant families back in time any of Christopher A. Long’s articles or websites will offer extensive historical and genealogical information on the merchant families (see christopherlong.co.uk; christopherlong.co.uk/migrations/index.ht ml or www.academia.edu/.../Greek_ Migrations_Phanariot_and_Chio t_Families

Given the standing of the Benachi family it should come as no surprise then to discover that the individual family members of Nicholas’ generation proved equally influential. Aside from Nicholas’ leading role among Greeks in North America his brother, Emmanuel, was the mayor of Athens. Anthony Benachi, a son of Emmanuel, donated the family home in Athens for the prominent Benachi Museum. Another branch of the Benachi family in partnership with the Choremi clan also operated an international cotton business at Alexandria, Egypt from the mid-1800s until dispossessed by Nasser (1918-1970).

Local Biloxi historians have delved in histories of the extended Benachi family. A son of Nicholas Benachi, Anthony (Tony) Nicholas Benachi (1858- 1916) made his livelihood in New Orleans as a cotton broker and at Greenville in the Mississippi Delta (Biloxi Herald, February 16, 1916). Tony Benachi offered an oral history account of his family.

A segment from that longer tale relates that “my father married Catharina Grund and in 1852 purchased the beautiful house built by Joseph Zeringue. Benachi rebuilt and added on many times and this property still exists today and is known as the Benachi House, located 2257 Bayou Road. Father also built our summer home on the beachfront in Biloxi, our home away from home. That house stood until Hurricane Camille claimed it in 1969. My father and Catherina were the parents of four children: Michel Benachi (1841-1853), Marie B. Botassi (ca. 1842-1894+), Marino Benachi (1853-1853), and Pandia N. Benachi (c. 1857-1886+). The Yellow Fever Epidemic of 1853, took the lives of Catharina and two of the children, Michel and Marino (5 months old), while they vacationed in August, here in Biloxi.” They were all buried in the Benachi family plot in New Orleans (New Orleans Picayune, September 4, 1853).

Among the surviving children of this marriage Marie Benachi Botassi married Demetrius Nicholas Botassi in December 1862. A son, Demetrius Botassi was born at New Orleans on November 15, 1865. She appears to have spent most of her life as a resident of Paris, France. Mr. Botassi was living in New York City in 1886. Pandia N. Benachi married Sarah Ann Stohr in January 1877.” It should be recalled that Botassi is the person who alerted Nicholas Benachi to the presence of an Orthodox priest in New York City who could be approached to serve at the Holy Trinity church in New Orleans.

On February 8, 1886, Nicholas Marino Benachi died in New Orleans and was buried on February 9, 1886 at the family tomb in the Saint Louis Cemetery Number #03 (Daily Picayune, 9 Feb 1886, p. 4; New York Times, 10 Feb 1886, p. 5). Benachi was certainly not the only Greek in New Orleans. In point of fact Benachi and his fellow merchant partners were not even the first Greek traders in New Orleans. The Draco and then Dimitry families arrived before Benachi and his partners/extended kin. What did this collection of Hellenes do in what was the third largest port in North America during the years they lived and worked within its boundaries? There is so much fundamental work to be done in Greek-American studies.