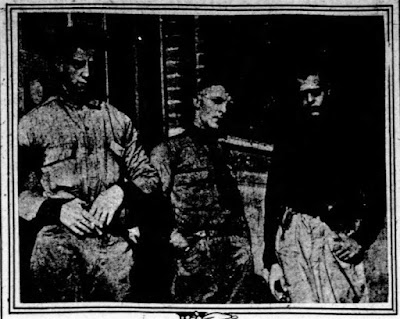 On First Lap of Hike

Stopping only long enough to visit the White House and The Herald office, Matthew Agriaphiotis, 21, Charles Kefalas, 19, and Pete Spirou, 20, three Greek-Americans, passed through the District yesterday morning on the first leg of their three-month tramp to Frisco.

Weary of New York City, the trio left the downtown district of that city promptly at noon last Saturday and they arrived in Washington at 11 o'clock yesterday.  One of the treasures of the party is a letter given them just before they left by Mayor Hylan addressed to the mayor of San Francisco.  This letter asks Mayor Rolph of Frisco "to grant them an audience" and expresses the wish that the boys will succeed in accomplishing their long distance hike.

The trio have pledged themselves not to separate, not to remain in any town en route and not to ask any passing vehicle for a lift.  They expect to make the trip in three months, walking fifteen hours a day.  At the end of every five miles they plan to rest five minutes.  They are traveling light.  There is one change of underwear for each, two blankets between them and $400 in cash.

All three are vegetarians.  Their diets will include lettuce, carrots, beets, spinach and potatoes.  They say meat loads them down and they can't make good time.

Leaving Washington, the boys went to Alexandria, Va., where they expect to take up the State highway into Johnson City, Tenn.  They are taking a Southern road to avoid being snowbound.  They will travel on the old Spanish highway to New Orleans, from where they will go to Fort Worth, Tex.  From there they plan to take the Gulf highway to Colorado Springs, Colo., then to Salt Lake City, and over the Lincoln highway to Frisco.