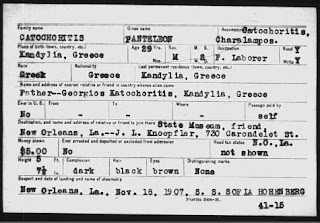 FamilySearch.org has a new FREE database titled "Louisiana, New Orleans Index to Passenger Lists, 1853-1952" which includes 1,818 born in Greece and 794 born in Turkey.

The following information may be found in these records:

Ship's arrival date and port of entry
Name of ship and port of departure
Names of immigrants
Immigrants' age, gender, marital status and occupation
Country where immigrant has citizenship
Last place of residence in that country
Name of relative or friend living at last residence
Name of relative or friend to be visited in this country
Destination
Physical description
Birthplace
The collection includes an index to Passenger Lists of Vessels arriving at New Orleans, Louisiana for the years 1853–1899 prepared by the Works Progress Administration. The records correspond with NARA publication T527: Index to Passenger Lists of Vessels Arriving at New Orleans, LA, before 1900, and were filmed at the NARA facility in College Park, Maryland. The information generally given for each passenger includes name, place of birth, age, sex, port of embarkation, seaport of arrival, date of landing, and name of ship. Some cards include numerical references which may relate to the location of the original passenger lists while they were stored on the second floor of the New Orleans Customs House.
Passenger arrival lists, or customs manifests, date back to 1820. The first official emigration station for New York was Castle Garden, located at the tip of lower Manhattan. Congressional action in 1891 resulted in federal immigration officials recording the immigrant’s arrival. After January 1892, passengers arriving in New York debarked at Ellis Island, located east of Manhattan in the New York Harbor. From 1892 to 1924, almost all immigrants entered the United States through the port of New York. When passengers arrived at Ellis Island, they were asked a series of questions designed to determine whether they would be able to support themselves and did not have any health problems. The information was supplied by the immigrant or a traveling companion (usually a family member). Only 2% of immigrants were denied entry into the United States. Incorrect information was occasionally given, or mistakes may have been made when the clerk guessed at the spelling of foreign names. These indexes may contain inaccuracies, such as altered spellings, misinterpretations, and optical character recognition errors if the information was scanned.
Greek family history Greek Genealogy Greek immigrants Louisiana Passenger Lists