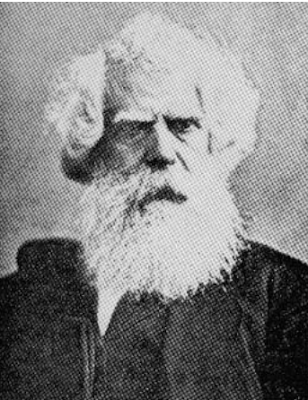 CHICAGO.  Evangelinus Apostolides Sophocles is without question the most mysterious of all the notable Greeks who sojourned to North America in the Nineteenth Century.  The second professor of Greek at Harvard College, this man's real name, his personal history and much else about him remains to this day virtually unknown.  While recognized by his contemporaries as "a scholar of extraordinary attainments," this "eccentric, cynical, soft-hearted, monk-like scholar" never graduated from any known institution and was only the recipient of honorary degrees.

Nevertheless, all his various grammars, dictionaries, and exercise books are still available and they attest to what his contemporaries experienced that “his knowledge of the Greek literature in its whole length and breadth could hardly be surpassed, and he had much rare and profound erudition on many points on which western scholarship (was then) weak.” Sophocles’ numerous volumes did nothing less than demonstrate the linguistic continuity of Greek from Classical, Hellenic, through Byzantine and into Modern Greek.

For over forty years one class after another at Harvard College took Professor Sophocles’ classes in Greek, all at a time when Greek was a revered aspect of education. As the seemingly endless series of published reminiscences demonstrate, Professor Sophocles, classicist and neo-Hellenist, was not only an instructor for generations of students but was also one of the most unforgettable Greek these Americans ever met. Clearly, Sophocles told various versions of his life story and it is from these varying accounts I now offer this account.

Sometime between 1800 and 1808, Sophocles was born in the village of Tsangarada in Thessaly, on the slope near Mount Pelion. The exact date of his birth and even the original form of his name are uncertain. His father's name was Apostolos and his grandfather’s Evangelinus. Depending on the source one cites the name of Sophocles, by which he has always been known away from home, was given him in his youth by either his paternal uncle Constantius or one of his later teachers Anthimos Gazes, as a compliment to his scholarship. Whatever his true surname might have been, in time, the amalgam of these various names became how the world now remembers him.

Sophocles' parents died while he was a small boy and he was raised by two uncles.  One uncle lived in Cairo, where he spent several years in the branch of the Mt. Sinai monastery of St. Catherine. The other uncle, Constantius, was the abbot of the Greek monastery on Mount Sinai and young Sophocles would visit there in the summers. In later life Sophocles recalled that ‘the trips which he made thither across the desert provided him the most exciting boyhood experiences

In 1820, Sophocles returned to Thessaly, where he remained a year at school, chiefly studying the Greek classic authors. While the young Sophocles was under the instruction of various noted teachers he was a favorite of noted Greek intellectual Anthimos Gazes (1758-1828). Gazes had been twenty-five years in Vienna and had there published a periodical in Greek and a Lexicon of Ancient Greek, besides other literary works. In 1821 with the outbreak of the Greek Revolution the school, and Sophocles, at the age of fourteen, returned to the monastery in Cairo.

In 1829, with the death of his uncle Constantius, Sophocles first sought to become a teacher in Greece to no success. Next, seeking out his old teacher Anthimos Gazes, Sophocles found him on the island of Syra where he became acquainted with the Rev. Josiah Brewer (1796- 1872), a missionary of the American Board of Foreign Missions (ABFM). A few months later Sophocles accompanied Gazes to the island of Aegina, then the seat of the Provisional Government of Greece. Mr. Brewer, who accompanied the party from Syra to Aegina, there invited Sophocles to go to the United States, and by the advice of Gazes the invitation was accepted.

On July 15, 1828, Sophocles arrived at Boston and through the ABFM found himself associated with Mr. Colton, of Monson, Massachusetts. It was while at the Monson Academy that Sophocles studied Latin for the first time. In 1829, Sophocles entered as freshman at Amherst College, but due to ill-health remained only a part of one year. For the next 13 years Sophocles taught mathematics at Mount Pleasant Classical Academy (later Amherst Academy) at Amherst (1830-1834) as well as in Hartford and New Haven.

In 1835, Sophocles brought out his first book, A Greek Grammar for the Use of Learners, which was often reissued over the next thirty years. We can be sure that it was this landmark publication for which Sophocles received the honorary degree of AM from Yale College in 1837. From 1837 to 1840 Sophocles taught at Yale College as an instructor in Modern Greek.

In 1842, Sophocles came to Harvard College as Tutor in Greek, and remained until 1845. Something of the overall regard for Sophocles’ publications, his teaching and his interaction with his fellow scholars can be seen in the awards and academic positions he soon received. In 1847, Sophocles received the honorary degree of a AM from Harvard. In 1859 he was made Assistant Professor of Greek at Harvard. In 1860, a new Professorship of Ancient, Byzantine, and Modern Greek was created at Harvard for Sophocles, which he continued to fill until his death. This professorship has since been abolished by vote of the Corporation and Overseers. In 1862, Sophocles received an honorary LL.D. degree from Western Reserve University and in 1868 Harvard College awarded Sophocles an honorary LLD degree as well.

Aside from teaching Sophocles kept up a steady stream of publications both in the sense of new book-length studies, new editions of popular works and a variety of articles for the Academy of Arts and Sciences. Among his most notable publications are Catalogue of Greek Verbs for the Use of Colleges (1844); History of the Greek Alphabet, with Remarks on Greek Orthography and Pronunciation (1848); A Glossary of Later and Byzantine Greek (1860) and what many scholars consider his chief work, Greek Dictionary of the Roman and Byzantine Periods; comprising the Period from 1100 A. D. to the Present Day (1870). Self-study volumes, textbooks, linguistic studies, grammars and dictionaries all flowed from this man and with each new edition Sophocles spent considerable energy revising and streaming lining each work.

In 1845 Sophocles resigned his position at Harvard due to illness that continued until 1847. He was immediately reappointed upon his recovery. Still, during his illness Sophocles must have thought about his youth for in 1849 he visited Greece and the Mediterranean. He always maintained contacts with family and the monastic community of St. Catherine’s. During his first trip it is said Sophocles saw to the building of a bridge and a waterworks in his native village. In 1860, on his second visit to Greece and the Mediterranean he brought back rare books that today constitute a much-treasured part of Harvard College’s rare book collection.

In the reminiscences left to us by Americans Sophocles’ physical appearance often put off the local Yankees: “He was of small statue, with a leonine head covered with a mass of white hair and with eyes that gleamed piercingly. Although his appearance an manner awed strangers, he was gentle and full of humor to those who knew him well.” Quite literally, dozens of reminiscences exist by Sophocles students recalling the teaching methods or general eccentricities of this gentle unassuming monk-like individual.

Sophocles involvement with the wider Greek community in North America is for the moment unknown. He showed little or no sympathy with the attempt to resuscitate the ancient forms of Greek in the literary language of the new kingdom of Greece; indeed, for this indifference, and for his general lack of interest in the progress of Greece since the Revolution, he was often censured by his fellow Greeks. His long friendship with Michael Anagnos (1837-1906) director of the Perkins Institute for the Blind in Boston is recalled not simply in historic sources but also the subject of at least one fictional account.

Evangelinus Apostolides Sophocles died, December 17, 1883, in his room, No 2, Holworthy Hall, at Harvard College. Sophocles wished to be buried in Greece but was instead placed in Cambridge’s Mount Auburn Cemetery. In the obituary that appeared in The Nation we learn the following: “if any one judged by his stern and often forbidding manner that he was really harsh or unfeeling, it was an utter mistake. No man ever had a more tender heart, although he sometimes seemed anxious to conceal it. Nobody who ever saw him the center of a group of children could doubt his kindness or his human sympathies (January 3, 1884).”

In his will he left his considerable estate to the monks of St. Catherine’s, the daughters of a friend who had no other income, and to Harvard University he bequeathed all his books and papers. Dozens of encyclopedia accounts and other writings exist on the career and personal influence of this one man.

If we are ever to understand and fully comprehend how Greeks have been received in North America we must come to know and carefully consider the lives of individuals such as Evangelinus Apostolides Sophocles, the beloved ascetic of Harvard College.