Greek Workers in America - 1904; A Look Back at the Turn of Last Century 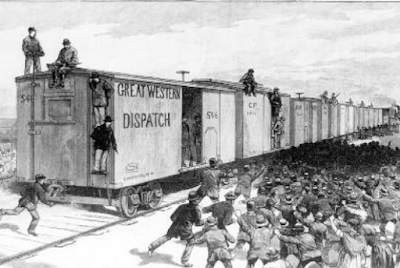 CHICAGO- Nineteen hundred and four is not a year especially noted in Greek-American historical accounts. Yet, unfortunately, it remains an all-too-typical year for those who arrived in the United States between 1880 and 1920.

Deaths abound. Bloody strikes, murders, industrial accidents, riots and senseless killings of all manner engulfed Greeks working in America during 1904. There is even a newspaper account claiming a mass killing of Greek laborers that comes out of nowhere and just as quickly disappears from the pages of history.

What I can offer here is really no more than a rough tabulation of these events. Far from simply a morbid exploration into some best-to-be-forgotten moments this account is meant to honor that generation by illustrating, if only in passing, the daily dangers in which they moved. That these events will be new to the majority of readers speaks not about them but that singular generation which lived through these experiences and then simply let them be forgotten. Clearly, we are descended from a people not easily frightened or long subdued.

Given that all these events occurred in 1904 I will not add the year to my citations below. I will however add the name of the town and state in which these news reports first occurred. The point being that news about the Greeks was not something only known in the major metropolises. Small town America down to the most remote of hamlets frequently read about the newly arrived Greeks.

Let us begin with the broad category of labor disputes. I use this term since throughout the early 1900s, in the American public press, there is a very thin line (and sometimes none at all) between what are reported as “Greek riots” and “Greek strikers.” One such Greek riot was the Stanford Tunnel dispute which took place in Monroe County Indiana. A work gang of some 150 to 200 Greeks (and “other foreigners” although they are never identified) had been hired to work at the Stanford Tunnel by the Indianapolis & Southern Railroad. For reasons never discussed in the press the Greeks were not being paid and so they refused to work, demanded their wages and even threatened bloodshed (Denver Post February 14; Montgomery Advertiser (Montgomery AL) February 15). Attempts to arrest the Greeks failed, bench warrants were issued and even the Indiana Governor Winfield T. Durbin (1847-1928) became involved.

As it was reported “instead of going out on strike the laborers have done considerable damage to the property of the railroad company. Governor Durbin has telephoned Judge Wilson (who had issued various arrest and other warrants) commending him for his action, and advising that he might call upon the state for arms, if necessary, but in any event not to hesitate to suppress the uprising (Muskegon Daily Chronicle February 15).” Faced with Greek resolve local officials simply paid the laborers in silver and gold and they left peaceably. Later in the year Greek laborers once again rioted in rural Indiana, this time around Lawrenceburg, when not paid with exactly the same results (Elkhart Weekly Truth November 3). Other such Greek riots in 1904 are reported to have taken place in communities as diverse as Neosho Rapids KS, Lynn MA, Omaha NE, and elsewhere.

Beginning in early 1904, a series of different walkouts and strikes finally culminated in July with the Amalgamated Meat Cutters formally going out on strike against all the meatpackers in Chicago. African-American and Greek strike breakers were immediately hired and sent into the packinghouses. An extremely bitter strike the Greek workers who had been hired came directly from Ellis Island to Chicago and unwittingly drew particular attention from the union strikers (Minneapolis Journal August 24). Greek businesses and Greeks in general throughout Chicago were boycotted and even attacked.

On April 5th John Nicholos, one of the Greek strikebreakers, was shot and killed (Macon Telegraph April 6; Omaha Daily Bee April 6). Other reports have it that two other Greeks were shot but not killed and then other reports say one of these two men was killed (Paducah [KY] Sun) April 5; Dakota County Herald (Dakota City NE April 9). Such was the turmoil this point remains unclear. Especially since scholars have not focused on the Greek role in this strike instead looking at it in terms of the displaced union men and/or the African American strikebreakers. In point of fact at least six other strike breakers who were neither Greek nor African American were also shot and killed and/or wounded (Boston Herald August 21).

A great deal of hostility was shown Greeks across the city as is well reported in the Greek press of Chicago and elsewhere. A tell-tale sign is how local priest Rev. Father Cyril Georgiades issued anti-negro remarks to the American press and publically stated he would not give communion to Greek strikebreakers (Guthrie Daily Leader [Guthrie OK] August 22; Cleveland Leader August 22). This must have had some impact since “one hundred and eleven Greek strike breakers deserted the packers yesterday as a result of the influence used by the Greek societies and the Greek Church (Ottumwa [IA] Tri-weekly Courier August 23).”

On February 19, one of the worst recorded railroad accidents took place at the Lucin Cutoff just west of Salt Lake City. Sixteen Greek workers were killed when two trains collided and dynamite on one of the trains explored. On October 22, 2000, at Leavitt’s Altorest Memorial Park in Ogden Utah a monument was finally raised to these men. A plaque had already been placed for these victims at the Holy Trinity Greek Orthodox Church in Salt Lake.

A few individual killings for that year include but is not limited to Constantine Chipouras who was shot and killed by his cousin and best friend Pantelis Calavritinos because the later “ suspected the relations between Constantine and Mary Calavritinos (Pantelis’ sister) were not as they should be between cousins (Boston Herald March 10).” Bill Farro, a Greek in Salt Lake City was stabbed to death by Mark Zizeich cause unknown (Deseret Evening News August 15) and Peter Maniatis was disemboweled by fellow Greek Peter Pappas in Woburn MA over a $15 debt (Pawtucket Times (Rhode Island) October 24).

I could go on with citations of other such events but let me conclude with an especially dire account of one particular Greek railroad maintenance gang. “The Charleston, Mo. Courier says: Last Thursday a foreman of an extra gang on the Frisco, near Pawpaw Junction, in New Madrid County, shot and killed thirteen Greek laborers with a Marlin rifle. The trouble grew out of the failure to pay the men at a specific time. So they rebelled and got a rope with the intention of hanging the foreman hence the wholesale killing. The above comes from a reliable source (Cairo [IL] Bulletin July 14, 1904).” I have found no other news items to substantiate this account. No listing of the dead or what happened to the unnamed foreman. But after what I have outlined above does this account seem all that implausible? Adding fuel to this thought is the fact that such news accounts concerning daily physical attacks on Greeks in the United States are not limited to 1904.