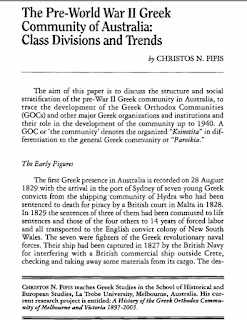 Published in the Journal of the Hellenic Diaspora, Year 2004
Pages 57-83

The first Greek presence in Australia is recorded on 28 August 1829 with the arrival in the port of Sydney of seven young Greek convicts from the shipping community of Hydra who had been sentenced to death for piracy by a British court in Malta in 1828.  In 1829 the sentences of three of them had been commuted to life sentences and those of the four others to 14 years of forced labor and all transported to the English convict colony of New South Wales.  The seven were fighters of the Greek revolutionary naval forces.  Their ship had been captured in 1827 by the British Navy for interfering with a British commercial ship outside Crete, checking and taking away some materials from its cargo.  The destination of the commercial ship was Alexandria, a base port of the Turkish-Egyptian naval forces aiming to destroy the Greek revolution.  After negotiations between Greek and British authorities in the early 1830s the seven were pardoned in 1836.  Five of them returned to Greece with their traveling expenses paid by the Greek government.  The other two chose to stay and live in Australia."

You can read the entire article for FREE by CLICKING HERE