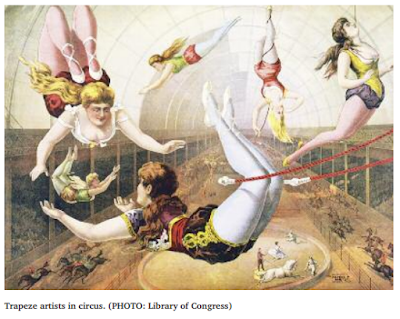 FLYING THROUGH THE AIR WITH THE GREATEST OF EASE:
GREEK ACROBATS IN U.S.

Published in The National Herald, September 1, 2018

Since the mid-1820s, Greek circus performers have thrilled American audiences.

The multitalented performer known as the Greek Rhigas performed in New York City between the mid-1820s and the 1850s. In 1876, Antonia Panay brought the Royal Greek Circus, the first Greek-owned circus, on tour to the United States. By the 1880s, massive Greek strongmen began to perform all across the nation working in circuses, carnivals and sideshows. The key point here is not just that Greek performers appeared in American venues but that these performances took place--over decades--not just in big cities but small cities, towns and even among the most remote of areas of the nation. Consequently, the first Greeks many Americans saw were not rough laborers but skilled colorful stage performers.

At circuses, vaudeville stages and county fairs all manner of Greek circus performers appeared, and still do: clowns, strongmen, trapeze artists, acrobats, sharp-shooters, magicians, sword swallowers, animal trainers, jugglers, magicians and bare-back riders. Much work must yet be undertaken to even offer the roughest of outlines on the presence of Greek circus performers on American soil. Clearly, individual studies of each category of performer needs to be compiled. To illustrate the extent of the presence of Greek circus performers on American soil I will plot out the appearances of ten Greek acrobats and acrobatic teams from 1896 to 2009. Let me quickly add that the vast majority of the Greek acrobats and troupes mentioned below performed all across the United States for years.

ears. In 1896, the first news account I have located, is an advertisement for a “troupe of Greek acrobats, jugglers, tumblers (Pittsburgh Press December 27, 1896).' Back-grounding the appearance of these Greek performers during the 1890s and later the American press frequently ran stories about Classical Greece and among those tales one frequently hears of 'Greek acrobats.”

By 1904, two different Greek acrobatic troupes are found in the American press: Sinon and Paris and the Manolos Family. With Sinon and Paris we read that “the management has a decided novelty. They are Greek comedians, and their act is known as 'the droll Greeks of olden time (Lincoln Republican (KS) September 29, 1904).” And they did not work alone as we see that “Sinon and Paris, Greeks, have a good act, one in which drollery predominates. Their dog is a wonder (Buffalo Times (NY) January 17, 1905).” Sinon and Paris are also referred to “men of muscle” on various occasions.

How a “strongman” specifically figured into these acrobat acts is still a crucial point I cannot now clarify by these news accounts. As an example, we read that “some of the greatest troupes of Greek acrobats that have appeared before the public have featured (George) Heraklides as their strong man (Lewiston Evening Teller (ID) January 23, 1906).” While Heraklides was a noted wrestler, in his own right, little other description of his involvement with acrobats sees discussion.

The Manolos family, as news accounts report, were always well received. This acrobatic troupe “includes father, mother and two sons and their photographs, which have been on display in the Orpheum lobby during the present week indicate they do some difficult work (Republic (Columbus IN) February 23, 1907).”

Decidedly interesting is the work of the Manola family of four “in acrobatics, feats of strength and tumbling. Signora Manola is the picture of health and strength, with a figure like Venus of Milo, a waist that is a re-proof to the wasp-like accomplishments of the social corset (Daily Oklahoman (Oklahoma City) October 18, 1905).” And again, “the headliner for the week is that of the Manola family, a European acrobatic act. Miss Manola has a standing challenge to ladies for this act, as she is one of the strongest women in the world (Marion Daily Mirror (OH) October 12, 1907).”

In addition to their vaudeville theater presentation between 1904-1909, “the Manolo Family of Greek acrobats...for the past five summers have been one of the leading features of Barnum and Bailey's circus (Weekly Press (Saint Joseph MI) November 4, 1909).” Yet, regrettably, I can find no exact or even vague description of the Manolos family act. We can read that “the Manolos Family...direct from the Barnum and Bailey Circus, is without question the best circus feature that has ever visited here in vaudeville. Their feats are remarkable and loud applause greets each trick as it is cleverly performed...” yet none of these 'tricks' are described (Weekly Press November 5, 1909).

If my account so far on these Greek acrobats seems a tad vague that is the consequence of the historical material. For reasons that see no examination bodily movement has no established descriptive language. Without question dozens of advertisements announcing the appearance of these Greek performers are readily found in the public press. Yet aside from reporting that these acrobats are about to appear or a brief mention of a current performance little else is written. There are no exact descriptions of their acts. Describing any kind of physical movement by these acrobats seems to be beyond these otherwise capable journalists.

The troupe of nine Killinos acrobats was one of the largest Greek acrobatic acts ever to appear on the American stage (Pittsburgh Daily Post October 26, 1909). While this troupe was especially popular in England their presentation of A Fete in Venice was one of their most acclaimed American routines. The Dimitrescu Troupe described as 'wonders' in various news reports. This troupe of “horizontal bar artists should meet with a cordial reception here as there has been nothing in their line seen here for some time past and these Greek acrobats are credited with much new and excellent material in their act (Los Angeles Times September 10, 1911).”

Clouding the issue of Greek acrobats even further than ignoring what they exactly did on stage other individuals are identified as “Greek acrobats” in the American press such as R.G. Neof and Nick Romes but no details of their careers are noted.

All female acrobatic acts seemed to have been the rage, for a time. The Five Idonias, ever identified as 'Greek acrobats and athletes' were “a quintet of pretty young women who present one of the best acrobatic numbers seen here in some time (Arkon Beacon Journal (OH) December 8, 1913).” The Five Idonias were to continue to appear on American stages across the nation for many years. Next we find the Abdullahs, a sextette of Greek acrobats, who were “the headline attraction at the New Grand this week. Their act consists principally of somersaults. This is done with a great deal of unnecessary yelling (Star Tribune (MN) November 24, 1914).”

In the 1950s, much was made of the “Karpis Trio, daredevil acrobats who always keep the customers sitting breathlessly on the edges of their chairs while they are performing (Gazette (Montreal, Canada) November 14, 1953).” This may be why we finally discover some description of their performance. At the 1954, Allentown County Fair we hear of the “Karpis Trio – these clever performers from Greece, two men and a girl – have mastered a sparkling routine that combines tumbling and balancing. Featured item is a number in which one member of the trio lies on his back, causes a bar to rotate horizontally by clever foot juggling, and supports the combined weight of the other two people working on opposite ends of the bar. Combined weight of the heavy bar and its two performing passengers is 325 pounds (Morning Call September 18, 1954).”

Then in 2009, we hear that 'Greek acrobats' are performing at a Chicago Greektown festival (Chicago Tribune August 27, 2009). As even this very cursory review of Greek professional acrobats demonstrates the time has long passed for accepting the stereotypical view that all we have ever been in North America are laboring immigrants.