Halki Seminary's Library to be Digitized 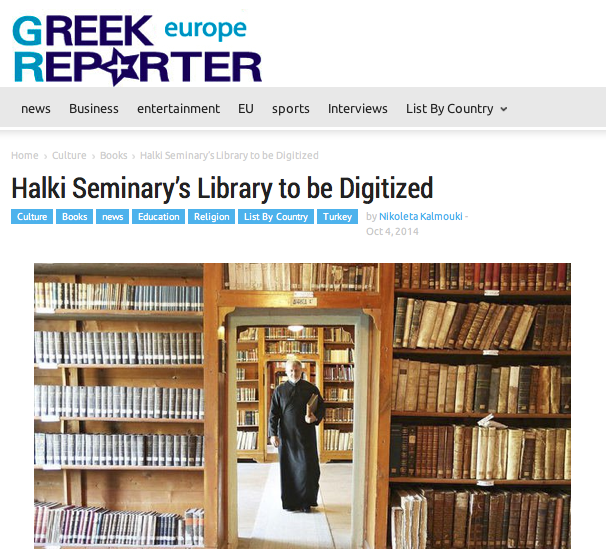 HALKI SEMINARY'S LIBRARY TO BE DIGITIZED

The rich library of the Greek Orthodox Halki seminary, which includes some of the world’s oldest printed books, will be digitized.

The seminary library numbers 69,000 volumes. While most of the books date back to the 18th and 19th century, there is a copy of Aristophanes’ comedies published in 1484, along with first edition copies of the Bible and the Torah.
Next month, volunteer experts will start transferring the rare books into PDF format and digital archives. The Metropolitan Bishop of Bursa and Abbot of the Hagia Triada Monastery, Elpidophoros Lambriniadis, announced that they will reach an agreement with a Munich-based library to help preserve the books.
“The books are very old and need conservation work. The special maintenance project will be carried out by priests, experts and Erasmus students,” Lambriniadis said.
The library is situated in the seminary’s basement floor and has five halls with a wide range of books in the fields of literature, philosophy and religion, in English, French, Turkish, Greek and Latin. The books are protected from insects by small pockets of lavender collected from the school’s garden.
The Halki Seminary was established in 1844 as part of the Hagia Triada Monastery. It operated continuously until its closure by Turkish authorities in 1971 due to a new law that put religious and military education under state control.
- See more at: http://eu.greekreporter.com/2014/10/04/halki-seminarys-library-to-be-digitized/#sthash.AyLOl8mc.dpuf