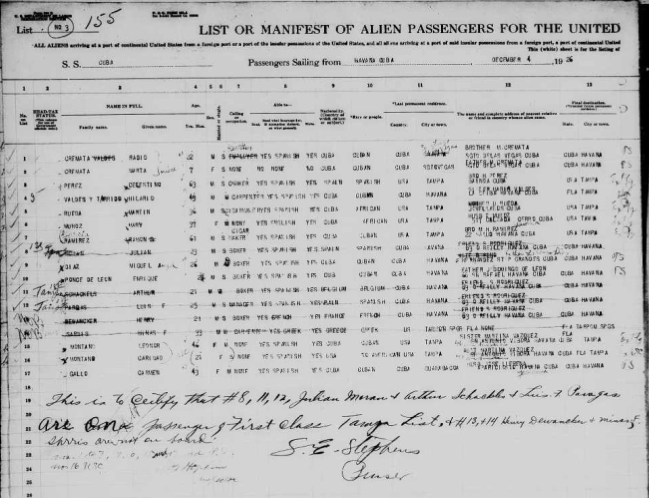 The FamilySearch.org website offers FREE access to their database - FLORIDA, TAMPA PASSENGER LISTS, 1898-1945.  There are 239 people in the database who have listed Greece as their place of birth.


DESCRIPTION OF DATABASE by FamilySearch.org

This Collection will include records from 1898 to 1945.
The passenger lists are digital copies of the original records. The earliest records are handwritten pages. Later records are usually handwritten on pre-printed pages. The records are arranged by the date of entry into port.
This collection consists of lists for those arriving in Tampa, Florida. It corresponds to NARA Publication M1844: Passenger Lists of Vessels Arriving at Tampa, Florida, November 2, 1898 - December 30, 1945.
There are two gaps in these records: December 21, 1902-September 2, 1904 and May 1, 1915-November 30, 1915.
Passenger arrival lists known as customs manifests date back to 1820. Congressional action in 1891 resulted in federal immigration officials recording the immigrants’ arrival.
Arrival lists was used by legal authorities to gather personal information about immigrants prior to the person being allowed to live in the United States.
The information was supplied by the immigrant or a traveling companion (usually a family member). Incorrect information was occasionally given, or mistakes may have been made when the clerk guessed at the spelling of foreign names.
RECORD CONTENT
Passenger lists prior to 1906 generally include the following information:
Passenger lists after 1906 generally include the following information: