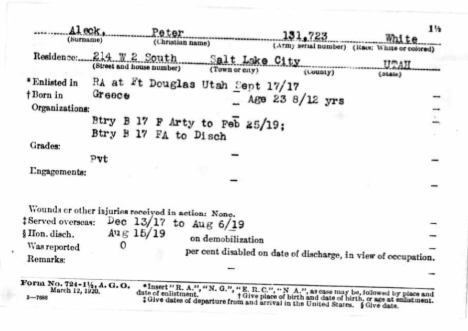 Ancestry.com has a database online that is titled - UTAH, MILITARY RECORDS, 1861-1970  which includes 410 people who listed Greece as their place of birth.


Don't forget - most of you can access these records online at your local public library for FREE.  Read more on one of my previous posts "Something New To Try When Using Ancestry.com in the Library for FREE"
RECORD DESCRIPTION FROM ANCESTRY.COM


This database contains military records on Utah servicemen and women created or collected by various state government agencies. They include questionnaires, index cards, photographs, and newspaper clippings going back to the days of Utah’s territorial militia.
World War I Service Questionnaires, 1914-1918
The Utah State Historical Society sent these questionnaires to Utah World War I veterans and their families shortly after the war in an attempt to compile a history of the war as it related to the state. The four-page questionnaires were filled out by the veteran or a family member and asked for both personal and military information, including
Respondents were also asked to provide a photograph and other clippings or relevant materials.
Military Service Cards, ca. 1878-1975
In 1942 the Utah State Historical Society began creating a record of Utahns’ military service in World War II. In 1957, the scope was broadened to encompass all Utah veterans, and this collection includes sets of index cards extracting records from the Spanish-American War through Vietnam, though cards for Korean and Vietnam are not comprehensive. Veterans may be found in more than one card set.
Card sets include
Some cards may list as little as a name and address, while others include extensive personal and military service information: birth dates, marital status and wife’s name and address, next of kin, burial place, unit information, places and dates of enlistment and service, discharge details, etc.
Governor Wells Spanish-American War Scrapbook, 1898-1899
This scrapbook was compiled by the governor’s office during the Spanish-American War and documents events related to Utah and the war with newspaper clippings.
Spanish-American War, Philippine Insurrection Service Cards, 1898-1902
This card file was created between 1957 and 1965 by the Military Records Section of the Utah State Historical Society to document the service of Utahns in the Spanish-American War and Philippine Insurrection. Cards include
Utah Indian Wars, Territorial Militia Service Cards, 1850-1880
Information about members of the territorial militia, also known as the Nauvoo Legion, was extracted by the Military Records Section of the Utah State Historical Society. Cards list
Other details, such as a pension claim number or burial information, are sometimes included as well. The cards are not a comprehensive list of all members of the territorial militia.
Records in this database can be searched by