How Greeks Made Milkshakes a National Drink in Australia 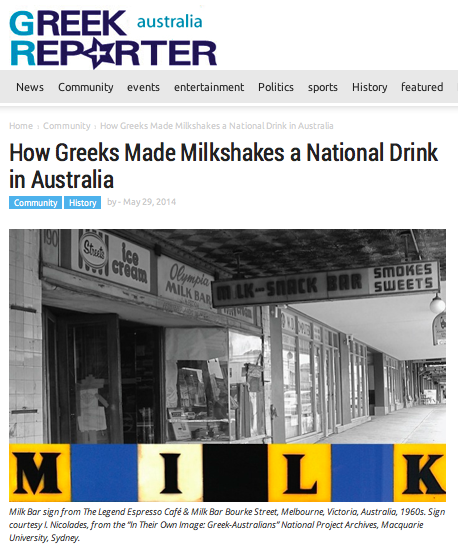 HOW GREEKS MADE MILKSHAKES A NATIONAL DRINK IN AUSTRALIA

published in the GreekReporter - Australia on May 29, 2014

The pair have suggested that 5 years after Mick Adam’s (Joachim Tavlarides) creation of the “milk bar” in Sydney in November 1932, some 4,000 milk bars were operating in Australia (most were Greek-run), and that by the 1950s, milkshakes were confidently challenging tea as the most commercially popular light beverage of choice.

Alexakis and Janiszewski point out that commercial Greek involvement with milkshakes commenced in the United States during the late 19th century – particularly in the southern states.

In Australia, milkshakes were being sold in pubs and emporiums just as Greek chain migration was increasing to the Antipodes in the 1890s. Some of these Greek arrivals were from the United States and they took up selling milkshakes primarily on street corners – either shaking the ingredients (cold milk diluted with water and flavoured with vanilla powder) by hand, or with a hand-cranked machine (imported from the United States) that violently shook the contents, one or two glasses at a time. At this stage however, the drink was not exceptionally popular.

With Adams’ “milk bar” revolution, its status quickly changed – Adams promoted the milkshake as a healthy food, imported electric Hamilton Beach milkshake makers to provide speed, efficiency and multiplicity in the production, and then undercut by fivepence the price of milkshakes to customers.

READ THE REST OF THE ARTICLE