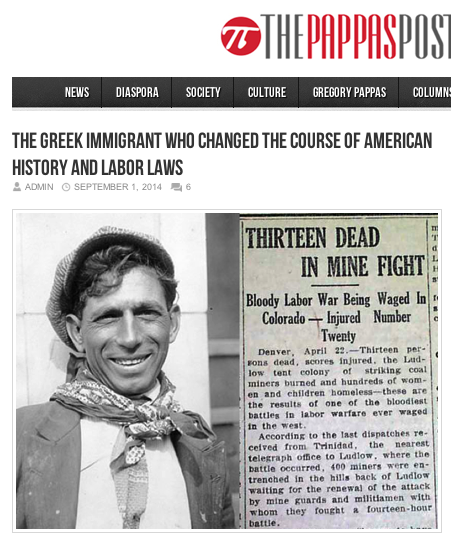 Published by The Pappas Post on September 1, 2014 in honor of Labor Day

Excerpts from the article:

As we celebrate Labor Day today across the United States, we should take a moment and remember the legacy of a Greek immigrant from Crete named Louis Tikas whose heroism and activism a century ago set the stage for the reforms to American labor laws and workers’ rights. Not much has been written about the story, with the exception of an important book called Buried Unsung.
Tikas was born in Crete and emigrated to the United States with thousands of his fellow islanders and countrymen. Official and unofficial documents point to an astonishing 40,000 Greeks working in Rocky Mountain mines, mills and railroads before World War I.
Tikas, whose full name was Elias Spantidakis, was shot and killed by US government militiamen on April 20, 1914 along with over dozen others— including women and children. The event is known as the Ludlow Massacre and involved a colony of workers— mainly immigrant workers from Greece, Italy and elsewhere, who were in the midst of a 14-month strike at a coal mine operated by Colorado Fuel & Iron Company owned by mogul John D. Rockefeller.. . . . . . READ THE ENTIRE ARTICLE
To mark the centennial of the event this year, Greek filmmakers Lamprini Thoma and Nickos Ventouras created a documentary called “Palikari” which charts the story of the strike and Tikas’s murder, as it survives in oral and family traditions, as well as in official history. They interviewed historians and artists, some of them direct descendants of those striking miners.
Watch the trailer of the documentary “Palikari” here: