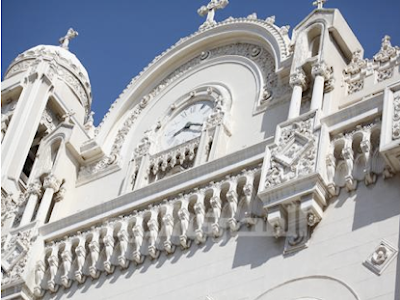 "The air is damp, it is sunny but a light breath lingers carrying the smell of the sea; that distinct smell of Alexandria fills my lungs again, a smell that I had known and loved since I was a child.
He stands in front of his drapery showroom in Manshiya lurking for any potential buyers; his foreign features and different posture makes him stand out. “I was born in Alexandria,” says Samy Ahmed Ibrahim, a half-Greek citizen. According to the 25-year-old, more than 4,000 Greeks lives in Alexandria nowadays. They meet regularly, usually at the Greek Clubs in Anfushi or Raml Station. “I rarely participate in events as the Greek community here is very exclusive,” states the young man in his broken Arabic. According to Ibrahim, such gatherings are important for networking, “The consulate does a great deal to help its community here.”
Ibrahim says the Greeks of Egypt feel at home but they have a responsibility towards their mother country. “As a Greek citizen I am expected to marry and have children to increase my country’s population,” concludes the young man.
George Vallas, the head of the Greek Community in Cairo, says the Greeks started settling in Egypt almost three centuries ago. At one point, they numbered 250,000, living in the cities and in the provinces. Johnny Emanuel Meros, the General Manager of the Greek Club, also had family outside the cities. “My grandfather established a scutcher in Dayrout and my other grandfather owned a bakery in Abu Hommos,” he explains. Meros thinks the country’s downfall started in July 1952. “Any country who dethrones its king is going to be robbed and stripped of its resources,” adds the middle aged man. "
READ ENTIRE ARTICLE