"An Insight into the Greek-Orthodox Community of Jordan" article - Greek Reporter, July 1, 2012 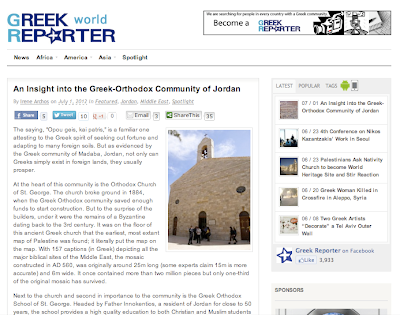 "An Insight into the Greek-Orthodox Community of Jordan" was written by Irene Archos and published in the Greek Reporter on July 1, 2012


"The saying, “Opou geis, kai patris,” is a familiar one attesting to the Greek spirit of seeking out fortune and adapting to many foreign soils. But as evidenced by the Greek community of Madaba, Jordan, not only can Greeks simply exist in foreign lands, they usually prosper.

At the heart of this community is the Orthodox Church of St. George. The church broke ground in 1884, when the Greek Orthodox community saved enough funds to start construction. But to the surprise of the builders, under it were the remains of a Byzantine dating back to the 3rd century. It was on the floor of this ancient Greek church that the earliest, most extant map of Palestine was found; it literally put the map on the map. With 157 captions (in Greek) depicting all the major biblical sites of the Middle East, the mosaic constructed in AD 560, was originally around 25m long (some experts claim 15m is more accurate) and 6m wide. It once contained more than two million pieces but only one-third of the original mosaic has survived."
READ ENTIRE ARTICLE